Glenn Beck said: "This is a day that we can start the heart of America again ... it has nothing to do with politics. It has everything to do with God ... turning our face back to the values and the principles that made us great."

Field Negro said: "Back to the values that made us great? You mean like the ones that said it’s cool to enslave people because they weren’t really people? Those values? Sorry, I think I will pass. Whenever I hear certain folks talk about going “back” to the good ole days, it makes me a little nervous. I will just keep it pushing forward if you don’t mind."
I'm with the Field.
Fox News agitator Glenn Beck organized a "Restoring Honor" rally in the shadow of Lincoln and Martin yesterday, not coincidentally the anniversary of Martin Luther King's "I Have a Dream" speech. The stated goal was to inspire a return to "the principles of the founding fathers," which coming from Beck is code for a return to the time when rich white men ran everything and black people were considered by law "two-fifths a man."

Ironically, this return to the principles of the founding fathers doesn't square with the opposition to the Islamic Center near Ground Zero, because didn't the founding fathers hold up freedom of religion as a sacred principle? Beck and his Tea Party followers are spouting some scary stuff, people. More code talking with dangerous intent. I have this uneasy sense that this is what Germany in the mid 1930s sounded like, felt like. It's all about fanning the flames of hatred, of us versus them, of enshrining white legitimacy and the vilification of "the other"—blacks, gays, Muslims, immigrants.
To wit: Last week in New York, a passenger asked a cab driver if he was a Muslim. When the cabbie replied that he was, the passenger lunged at him, screaming, "This is check point! I'm taking you down!" while stabbing him repeatedly in the throat, neck and face. Fortunately the cabbie, a naturalized American since 1973, survived. But this is what Glenn Beck is inciting. This is what Sarah Palin with her "Reload!" mantra, is inciting.
This is not supposed to be a political blog. It's meant to be a little family blog with photos and a bit of therapy thrown in. A place to write myself out of a funk, or set down moments I want to remember. But today, my funk is all about the extreme right's careful curating of hate.

Even the staging of Glenn Beck's event appears deliberate—take a look below. There are many photos from Hitler's speech at Nuremburg to support the possibility that Beck's rally was intended to stoke a very particular kind of sentiment, consciously or more likely unconsciously. I just can't bring myself to post more photos from that hateful event on my sweet little family blog. 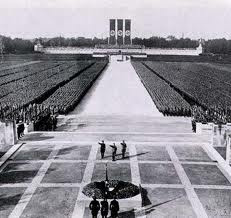 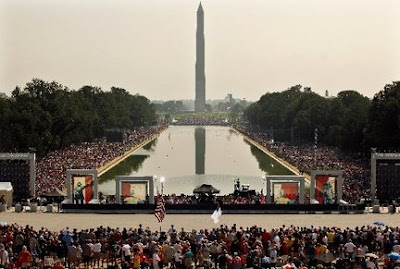 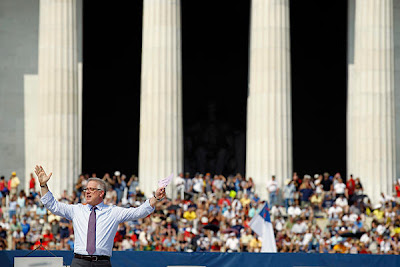