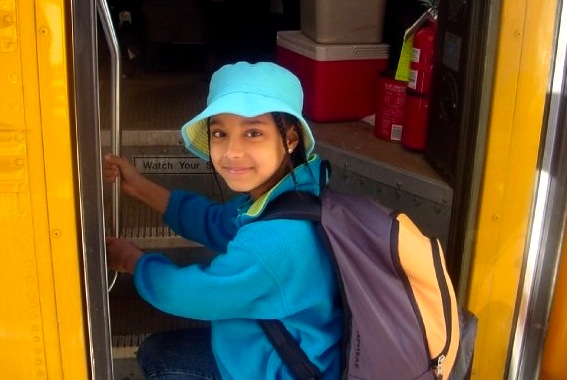 My daughter had just started second grade on September 11, 2001. She was 7 years old. Five years later, in seventh grade, when she was 12, as part of a class autobiography project, she wrote a remarkable piece about her recollection of that day. To mark the eighth anniversary of the tragedy, I am copying that chapter here.

My friends and I had the feeling that we were on top of the world. Partly because we thought we were so mature and partly because the weather was so perfect. It was our second day in the second grade. Perfect temperature, perfect sky: bright blue and not a cloud in sight. Everything was in a happy state. It stayed that way till the warm afternoon or maybe just before lunch, but either way, outside the window you could see the sun high in the sky, proud of all the light and warmth it was producing. We were reading a book during story time and either the lower school director or the student teacher at the time called Jay, our second grade teacher, to the doorway and whispered some piece of information with a look of dismay on her face. We were completely oblivious to the conversing teachers; we just saw it as a time to chat with one another until the class resumed.

Then Jay came back, with a thoughtful look on his face, only, this was a thoughtful expression that held some dread. One by one the class seemed to settle down, sensing something, worried about what had just happened. Jay spoke in slow motion, word by word: “A plane just crashed into the World Trade Center.” A panicked look spread across some of the faces, those who knew what the World Trade Center was. I asked my friend Akene what had happened. He explained that the World Trade Center was the two Twin Towers. I felt destroyed. I had seen the Twin Towers in the distance my whole life. I had drawn pictures of them from the roof of Akene’s apartment two years before when Toni-Leigh, our kindergarten teacher, took us to visit the farmer’s market and we had lunch at his house nearby. It was practically impossible, those two secure structures had to remain in the sky forever, they were glued to the sky. Without them, the sky would be lonesome, even with hundreds of other skyscrapers. And besides all that, my dream had vanished. All I wanted was to be able to visit the towers, see what was actually inside, and experience the whole thing. Now they were up in smoke with a metal plane sticking out the side of it.

Jay had his hand on the top of his head pushing back his little spikes of hair and he seemed to be exploring the thoughts inside his head with alarm. He told us that parents would be picking us up or we would get home somehow, maybe by a teacher. Kids started disappearing as parents appeared. And then my dad came. I felt protected at that moment, like maybe we weren’t all going to die.

People scurried outside while hints of the beautiful day still slightly remained. I heard a deep silence in New York City. Rare, I think to this day, that all the noise, pollution of cars and people would disappear for a period of time. I would remember it though, all the way home, all the people walking in silence through the park, walking to Broadway, and making our way home. I had to keep reassuring myself that we weren’t all going to die; that a plane wasn’t going to attack all of New York. I remembered how before we left school, Jay had announced there was a second plane that hit the second tower, and that he felt our parents should explain everything to us. I didn’t want to break the tense silence between me and my dad on the way home. I couldn’t comprehend anything going on. I just knew it must have been serious if we had to leave school.

That night, I tucked under my mom’s arm with my knees pulled into my chest, making myself a ball while she watched the news and the horrible clip of my two dreams falling apart, dying. Finally, I asked what had been on my mind the whole day, “Mommy, are we going to die too?” My mom looked somewhat horrified. But she replied in a calm voice, “No, they have no interest in us. They were trying to get back at our government. They think our government did something wrong to them."

A few years later, my mom showed me some of my old work she had found in a drawer in my room. It was from the pre-K or maybe it was from kindergarten. It was a story I had dictated about a picture I had drawn. I remembered it vaguely. It was about something bad that made the Twin Towers start to fall over, but the big wind came and blew it back into place. I had drawn this picture and told this story before anyone had any idea that the Twin Towers might be in danger.

Now that more years have passed, people often share their stories and experience of that day. We all remember that perfect blue morning, turned to disaster.
Posted by 37paddington at 8:30 PM