Sometimes, all it takes to get in the flow of your life is to say yes to an invitation.

On Friday, we closed early at work for the Labor Day weekend. It was the last weekend of freedom for my daughter and her friends, all of whom start school next Wednesday. She wanted to go to the beach. She and two friends and their mothers are creating a tradition of going to the beach on the last weekend of summer. I say creating because last year was the first time they did it, but they had so much fun they promised one another to do it every year. I love these kids, who have been my daughter's friends since they were all 5 years old, and I love their mothers, who have become dear friends of mine over the years. But I wasn't able to go on their beach outing last year; work intervened. So when my daughter begged me to join them this year, I decided nothing would stop me.

Problem was, I had to finish editing a story with a writer who is particularly painstaking and this was our last round before the story shipped. This woman is actually my favorite writer to work with. I love her work ethic and microscopic attention to content, her insistence on testing and testing and testing the voice and development and internal integrity of a piece. It matches my own preferred way of working as an editor, which is really old school in the current fast paced environment of publishing, but this writer and I have preserved a corner in which we can still work in this way. And you know what? Our stories always win awards. Every single year, we collect an small armful of plaques for the stories we worked on together.

Since we both believe this story we're working on will be another award winner, I didn't want to give it short shrift. Plus it's a heartwrenching subject (can't say what here; it would be tanatamount to giving away state secrets). Suffice it to say, I was experiencing one of those moments when you're determined to do everything fully, and maybe there aren't enough minutes in the hours to make it work. But I managed to finish up and dart out at 4:30 to meet the crew on the R-train platform. We were headed to Coney Island.

I hadn't even told my husband I was going. I texted him from the subway: "On the train to Coney Island with ______." He texted back: "You're on the train??? How did that happen?!" My dislike of the subway is famous. I am known for traveling the city in yellow cabs instead. For me it's moments of meditation (inside a taxi all my own) versus moments of claustrophia and hectic-ness (inside a crowded subway car). I wrote: "My daughter asked and the company is great." He sent back: "Our daughter is really working this only child angle!"--a reference to our son being away at college and our girl having us all to herself. He added: "Have fun."

The others were laden with bathing suits and blankets and towels and snacks. All I had was my two empty hands. It didn't matter. I bought everyone bottled water on the boardwalk, and we set up on the sand near the water. Lounging on blankets, the three 15-year-olds, two girls and a boy, munched on corn on the cob and peanut butter sandwiches and fruit and boiled eggs, while their mothers settled back to catch up on our week. The conversation was easy and meandering. While the teenagers were in the water, we shared stories of crazy things we'd done in our youth, changing the subject when our children arrived back and flopped down next to us, picking it up again when they left to stroll the boardwalk.

At one point, another text came in on my phone. It was from the writer I'd worked with earlier. She wrote: "That was a great edit today." Somehow, that added to the moment I was having. It was just beautiful on the sand as the dusk came down. The air was cool and salty. In the near distance, the lights from the huge Coney Island ferris wheel were a glittering circle, and the neon from the other rides dotted the night. The moon rose full over the water, and on beach and boardwalk and pier, every type of humanity was illuminated by it.

On towards eight-thirty, the kids came back from their adventure on the boardwalk, brimming with stories of odd characters and sponteous events that had transpired there. The fell against us, each child leaning againt his or her mother, comfortable and dozing in and out of the chatter. We mothers smiled at one another as we stroked their heads, each of us aware that this breezy evening under the moon, the waves breaking hypnotically against the sand, the carnival music and lights in the distance, was special.

We tried to wait for the fireworks, which happen every Friday night in summer. By nine, the beach was crowded with locals and tourists encamped for the display. But it was delayed because of the minor league baseball game at the stadium way down the beach. Finally, near ten, we gathered up our blankets and towels and bags and headed back to the subway. Waiting on the elevated platform for the train back to the city, we suddenly saw the sky explode with blooms of color and light. The fireworks had begun, and from where we stood on the N-train platform, we had a thrilling wide-angle view. It seemed even better watching from the subway platform with other straphangers; it was more authentically New York somehow.

Afterwards, we took the train back to Manhattan, arriving home near midnight. My daughter and I jumped onto the bed, waking my husband, who had been asleep. We regaled him with stories and he teased me again about actually getting on the subway. Soon, my girl went off to check her Facebook and I drifted off to sleep. It was, all in all, a really good day. 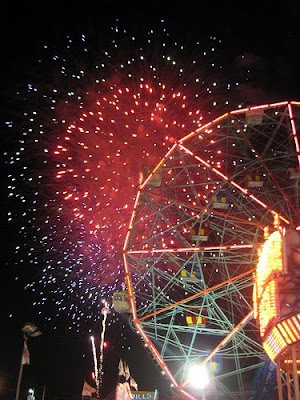