I'm going through a period in which I just feel sort of dull, which I hate to say is how I generally feel when not stressed to the max. I'm content in general, though not with the physical state of my body (stiffness and aches everywhere), but work is in a very gentle phase right now, slipping into my queue at regular intervals, a story or two from the magazine to edit each day, first pass pages to give a final read, an hours long video call with the editor of the book I just wrote that's coming out next March, in which we organized the order of images for the 16-page photo insert, some fifty pictures in all, for which I will now have to write captions. None of this brings the crashing anxiety of a blank screen and a whole book to bring into being from scratch, and yet that is when I feel most fully engaged with the work I am privileged to do in this life, most inside my being, not aimless and dull. 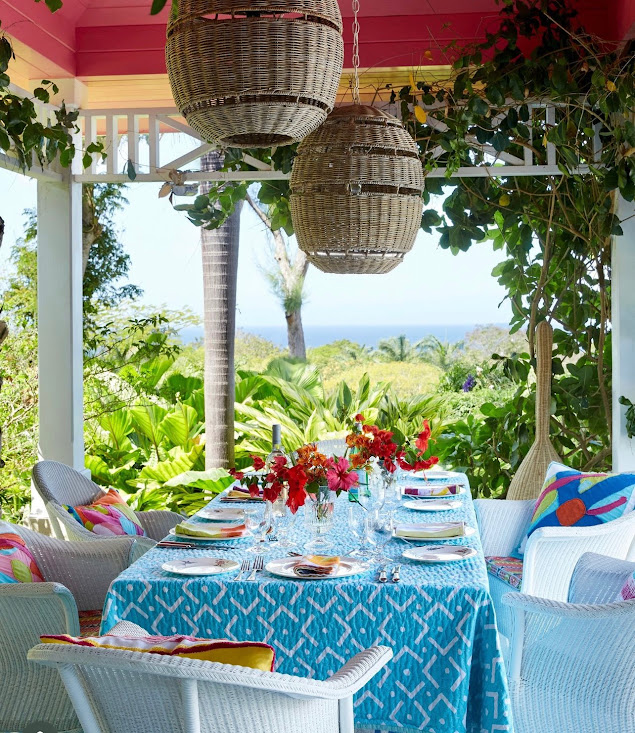 As I wait for the hoped-for next project to come online (have faith, my mother would say), I sit in front of the big window in my light filled living room, doing gentle work, thankful for my life, and the people in it, yet dreaming of being at that table on a verandah in the hills of my island home, or visiting that yellow house in whatever corner of the planet it exists, and generally being out in the world, the way my friend who just hiked to Machu Picchu in Peru is, instead of sitting inside my house, living inside my head, waiting for the next rush of contracted terror and adrenaline, and calling it purpose. 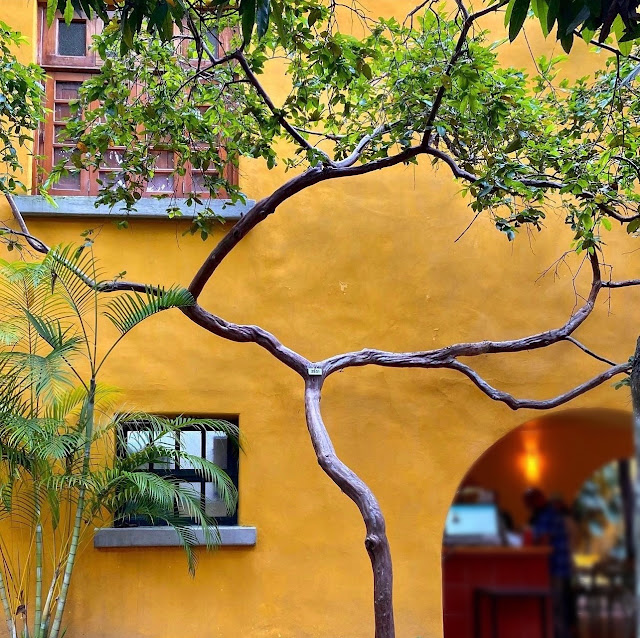 So the midterms, they gave me some hope. The 24/7 media had us believing that most of America is made up of would be MAGA insurrectionists when in fact most of America voted in repudiation of facism, and threw down the gauntlet for democracy. Some of the margins were razor thin, it's true, and that's still concerning, but I believe we dodged a bullet, installing governors and secretaries of state in most of the battleground states who will fight for the integrity of our elections, despite gerrymandered maps and continued efforts at voter suppression. I hope this means that fairness and decency will prevail in 2024, and in the meantime, Dems won the Senate, which means they will be able to appoint more judges who might actually care to uphold the rule of law, and that's a much-needed thing. 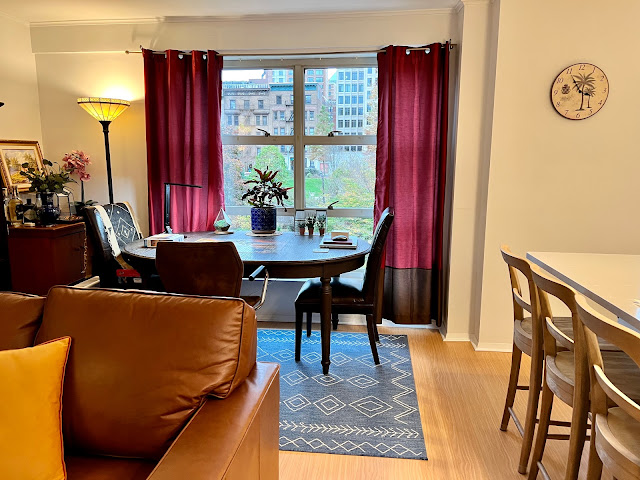 I ran across a quote that stuck to me back when I was a teenager. "I live in a small house, but I look out on a very big world." It occurs to me now that there are worlds within, and worlds without, and at the moment, I am in limbo between them. But Thanksgiving is around the corner. The first of our houseguests, my cousin from Trinidad, arrived this week. She is as easy to have as a true sister. 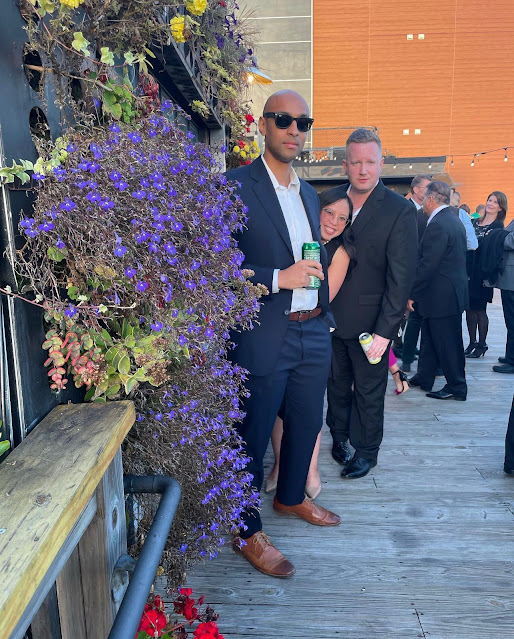 My son and daughter are continuing the constant round of weddings, with so many of their friends tying the knot, in fact, that last weekend they had to divide and conquer, with my son and his bride of six weeks attending one wedding in New Jersey, and my daughter and her fiance of one week representing the siblings at another wedding in lower Manhattan. My new daughter-in-law posted that picture of my son and her brother and sister-in-law at the NJ wedding, with my newlywed boy looking too cool for school. I just like the picture.

It occurs to me that Millennials and Gen Zs are not at all jaded by the idea of marriage. So many of them are stepping forward to commit, at least in my children's anecdotal experience. I saw a stat the other day that said that the incidence of divorce in the U.S. had fallen from roughly 50 percent a decade ago to roughly 40 percent today. Maybe that has something to do with the fact that so many of the couples currently getting hitched are doing so after relationships that have already endured for five years or more, many of those years living together. This premarital roommate situation is especially true in cities like New York, where rents are astronomical, putting a shared one bedroom in closer financial reach than two separate apartments. While this observation, too, is anecdotal based on my kids friendship circles, it could be the newly betrothed understand more completely just what they're getting into.

The conventional wisdom on living together before marriage was exactly the opposite when I was coming up. Back then, people were convinced it was a bad idea, but perhaps the world, expectations, ideas about partnering, have changed. Curiously, despite the falling divorce rate, uncoupling among my own generation of Boomers has recently spiked. The pandemic challenges apparently did us no favors, with Alabama and Wyoming leading the marriage dissolution rates for whatever reasons. But of marriages being newly embarked upon today, roughly 60 percent of them are likely to go the distance. I think maybe modern life with all its newfangled stressors is hard enough to navigate and maybe it feels just a little easier with a co-pilot. 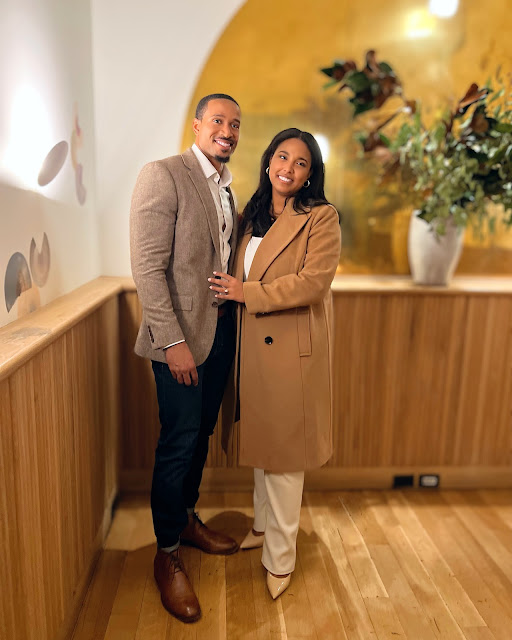 There's a lot going on in this little corner of our world. Life is happening at such a clip in fact that I've felt too caught up in experiencing it to be able to report on the happenings. But here's the lead story. My daughter and her love became engaged last weekend, and it was an entirely wonderful day that ended with the newly engaged couple arriving at a restaurant where my girl thought they would be having an intimate celebratory dinner, only to find her parents, his mom and sister, her brother and his wife, her sister cousin and her husband who flew in from Dallas to surprise her, and two other cousins (one of hers and one of his) waiting to toast their engagement over a family meal. 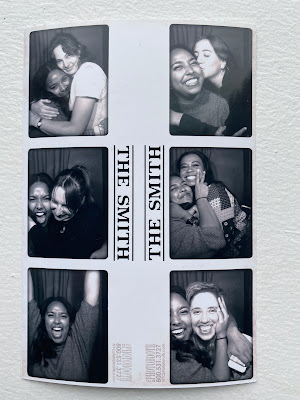 My girl, who had FaceTimed us right after the proposal, had no idea that we would be waiting for her, and she burst into tears when she saw us, sobbing in our arms. They were happy tears, she assured us. "This whole day has been so amazing," she said, "and I actually had the thought that the only thing that could make everything more perfect would be to see my family." Her love anticipated that, too.

Oh it had been a day, one surprise after another planned by her now-fiance, who hoped to build anticipation while including people in her life whom she dearly loves, starting with brunch with her five best friends from childhood, followed by, among other experiences, a manicure with three college pals and a shopping spree with two women with whom my girl feels the most supreme comfort. Assisted by a non-binary personal shopper who brought their own whimsy and joy, my girl and her two besties had a fantastic time trying on fantasy clothes while laughing and snapping Polaroids and sipping champagne.

All the family members  were already at the restaurant when my girl, who was running late, texted me: "Had a styling session with Brooke and Jasmine! It was THE MOST fun ever. Walked out with a brand new outfit that I feel very special in. Final stop is a hotel in midtown. Here I go!" 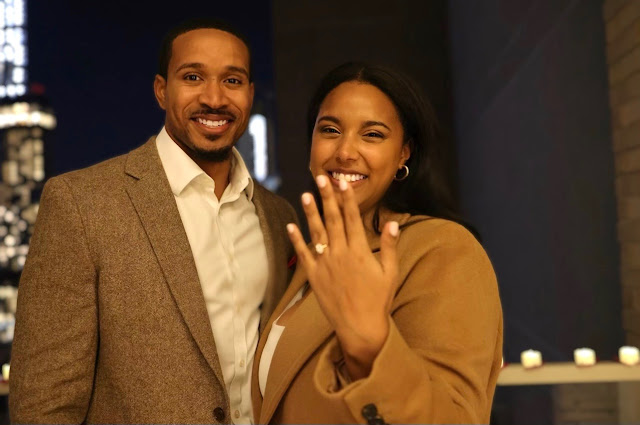 She knew that her love would be waiting, though she had no idea he had booked a room with a terrace overlooking the city where he had set up tea lights as a backdrop for the private proposal. There was more, so much more, the things he told my daughter that were so beautiful, ending with how much he treasured "the simplicity" of their relationship, their "deep ease" with one another. And then he was on one knee asking her to marry him, to which she replied, “Yes! Fuck yes!” She recounted her response later at the dinner table, and everyone, even her soon-to-be mother law, a retired schoolteacher, laughed delightedly at her conviction.

And now we have another wedding on the horizon, and a very happy couple—who met during their college freshman orientation and began dating in sophomore year—still riding the high of being newly engaged.

Here's another picture, we joke it's a prom pose. It shows my parents first three grands and their loves, in various stages of making a life together. I know that somewhere in the unseen, Las and Gloria are smiling down, because their highest wish for their children and grandchildren was always and only this—that our lives be filled to overflowing with love. 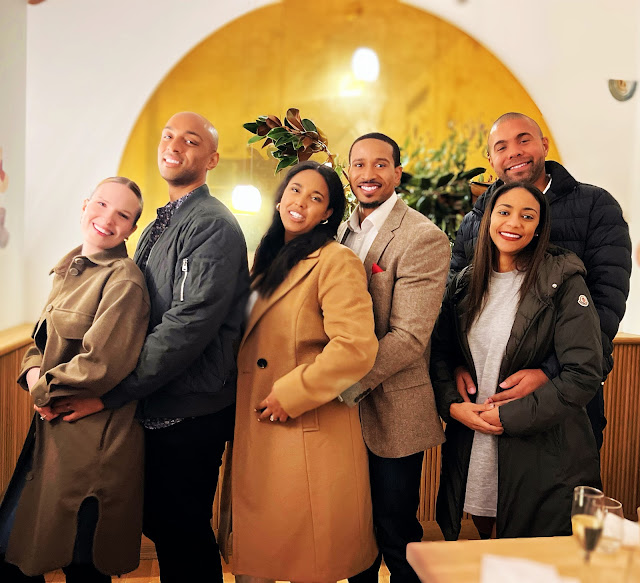 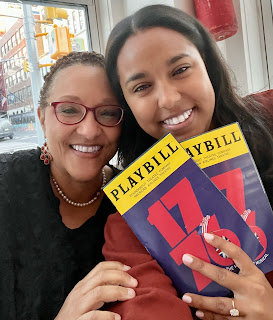 Four days after that magical night, I scored free tickets for the revival of 1776: The Musical, and my daughter was my date. The show is about the founding fathers debating and finally signing the declaration of independence, except instead of the white men in our history books, the signers are portrayed by actors who identify as female, trans, and non binary, and represent every ethnicity and body type on our American shores. It was powerful to see these non-male and non-cisgender actors reclaiming a passage of history from which they and theirs had been excluded. The performances were breathtaking, every voice soared.

Afterward, my girl and I went for our usual pre- or post-theater dinner at Seamore's, the seafood place she loves, where she told me a lovely thing. "Were you nervous not knowing what would be happening next?" I had asked her about the day of the proposal, because I know my girl has a good strong strain of the anxiety that often claims her mother in the face of the unknown. "Not one bit," she said. "I never knew who would be coming around the next corner, or what I would be doing next, but I was happy and excited, because I knew Noel had planned the whole thing, and he knows me, so I felt emotionally safe."

It was, I tell you, a balm to this mother's heart.

One more picture, this one of my girls. I just love their joy. 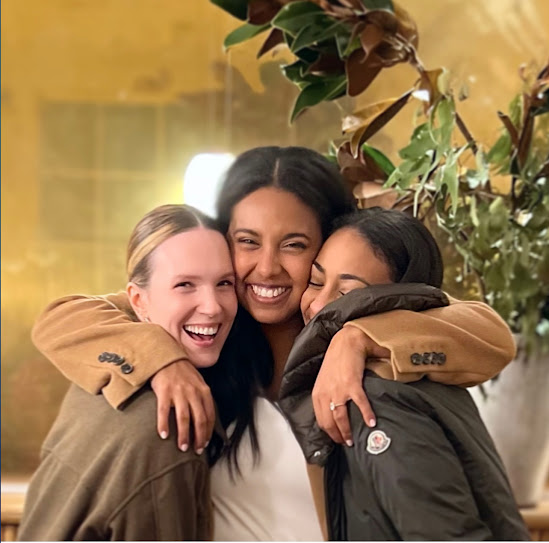