The Story of Us

No time to write much today, work and my inner life are particularly intense, but I wanted to note that my husband and I celebrated 23 years of marriage on Sunday last. We watched our grainy wedding video and marveled at how cute we both used to be, and didn't even know it. Oh my, he was handsome and swoon-worthy. And I still see that guy when I look at him now. Curiously, watching that video has fueled a deeper intimacy between us this week. I think it reminded us, in the midst of all the stress and wall to wall demands of children and elders and work, of what it felt like to be chosen. As self-indulgent and corny as that sounds, going off into the daydream of us falling in love has been the bright spot of my crazy, anxious, too-many-things-to-get-done-all-at-once week.
Posted by 37paddington at 5:30 PM 5 comments:

Beauties in the Pool 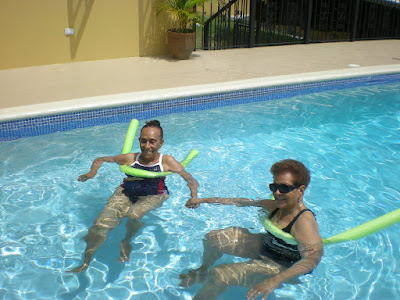 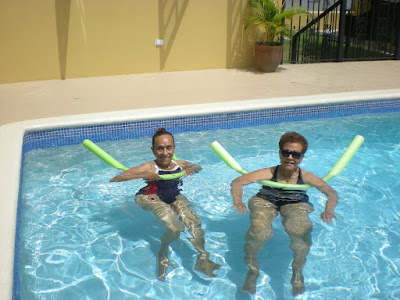 My mom (blue suit with white straps and red stripe, hair pulled back) and my aunt went swimming in my cousin's pool on a hot day in Jamaica. My brother e-mailed these snapshots to me this afternoon. My mom, by the way, is 87 years old and her baby sister, the one sporting those fly shades, is 84. These lovely ladies know how to seize the day!
Posted by 37paddington at 6:27 PM 9 comments:

Just got back from driving our son five hours upstate to college this weekend. As we walked through the door, my daughter asked, "Mom, did you cry?" No I didn't cry. But my husband had to put his hands on my shoulders and sternly push me out of there. It was hard to leave. Now I have to just let my boy be. No whiny, needy text messages. No unsolicited advice. Let him call us. Whenever that might be. 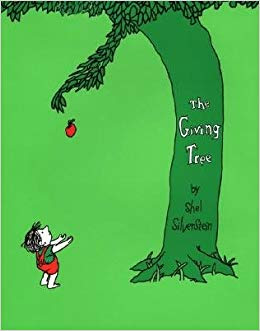 Maybe I'll write more about the big college move-in later. I'm still processing it all. For now, I'll just say, when my son was little, he had a book called The Giving Tree. His best friend's mother, a gentle Japanese woman, gave it to him as a fifth birthday gift. Back then, I used to silently resist the story when I read it to my son. It was about a boy who took and took from the tree, wood and branches and bark throughout his life--for pretend play when he was a boy, for a boat as an adventurous young man, to build a house when he started a family, and finally when the boy was very old and frail, and he had taken all he could from the tree, the tree offered him a stump to sit on and rest his aching bones. And always the tree gave of itself selflessly, grateful simply to be able to offer something to the boy. Even though I got the painful beauty of the story, I used to think, How selfish this boy is. Why is he taking so much from the tree? Why isn't he giving anything in return?

This weekend, I finally understood that story as the perfect metaphor for parenthood. It is not about the boy at all. It is about loving someone so deeply that there is nothing of yourself you would not give to see them thrive, to see them happy, to see them comforted.

Hearts Open as the Sky 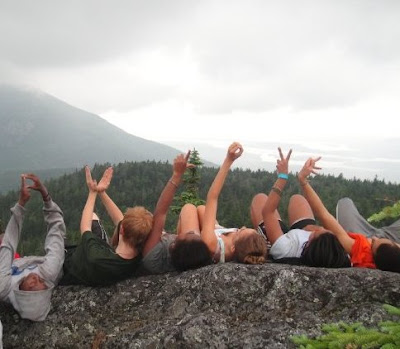 My girl (that's the top of her head, second from right, with her fingers in a V) hiked the Appalachian Trail with some of her fellow campers during the first week of August, then went white water rafting at the end of it. She was stoked! "I want to do that all the time when I grow up!" she told me, her words rushing against each other in that punctuated teenage way.

In short, her hike trip was magical, despite freezing nighttime temperatures and drenching rain. But even the elements couldn't douse the excitement of spending day after day with her friends under the open sky, collecting new experiences around each corner, bonding afresh on arrival at each mossy rock, thickly wooded path or pine covered hill. And she and a boy she liked talked their hearts out until way into the nights, huddled in their sleeping bags under a wide blue tarp. Does it get any better when you're 15?
On a high mountain in Maine, six of my daughter's hiking crew made this photographic homage to the week. Their hands spell out "PV Love." The initials stand for Pioneer Village, the name of their camp's home base by a lake in the woods. The love, of course, needs no explanation.
Posted by 37paddington at 12:41 PM 3 comments:

I am trying to understand my cousin Pearl (not her real name). I am trying to have compassion for what it feels like to be her, which is hard when she gets drunk and causes volcanic disruptions with her 90-year-old mother's home attendants and calls everyone horrible names. I am trying to make myself remember that Pearl isn't well: For the first 15 years of her life, doctors had her on a regimen of Phenobarbitol to treat her epilespy. Then they took her off it abruptly, after studies showed that it should never ever have been given to children. Pearl's drug and alcohol use began the very same year.

I remember when Pearl was just a small girl. She used to arrive with her parents from New York to visit the family in Jamaica. I can still see my aunt with her frizzy orange afro and lime-green eyes, pulling small Pearl into her side, and my uncle, upright and stylish in his tweed jacket and hat set at a slightly rakish angle, which belied the generous but often bewildered soul he was. Pearl was the American cousin, a few years younger than I was. She and her parents would fly in each summer for a month or more, staying a week at a time in different relatives’ homes.

The way I recall it, Pearl was a disagreeable child, her face screwed into a perpetual frown, lips always pouting, her shoulders folded forward, her posture unwelcoming, closed. And yet Pearl was strikingly beautiful. Her eyes, like shiny black seeds, darted about; her full lips, through tremulous, were poetically shaped; her polished, coffee-brown limbs seemed to flail and jerk when she tried to run, and to push themselves forward with super-conscious effort when she merely wanted to walk. The effect was both unsettling and mesmerizing. Watching Pearl, I often found that I stared too intently, unable to pull my eyes away at the polite moment.

A short, neatly-cropped afro accentuated Pearl’s perfectly-shaped head. Her tightly-curled hair never seemed to need grooming or shaping. I was in awe of Pearl’s hair, envying its gleaming sunup-to-sundown perfection. My own fledgling afro was the most ordinary of browns, and it was a wayward mess, kinky on the top, fuzzy on the sides, curly at the nape, so that I was forced to fluff it several times each hour, tucking in this lock, pulling out that one, struggling for uniformity.

Of course, Pearl never would have imagined that anyone could have admired anything about her. She never could see her own beauty, because when she paused before mirrors, a sort of funhouse reflection jumped back at her, rippling with ill-contained energy so that her very image in the mirror seemed to quiver, leaving Pearl unable to recognize anything but her jitteriness.

In truth, that quavering feeling lay at the core of her, surfacing in the impatient, bossy manner in which she interacted with other children, and in her abrupt way of speaking that left many of her elders to dismiss her as simply rude. To make matters worse, Pearl had a stutter, which might have accounted for her rough tone. Only her mother seemed to understand that Pearl could do no more than force the sounds out before they stuck like peanut butter to her tongue, caught in a endless repetition of syllables.

Pearl always wore small earrings in both lobes, and until she was ten and her body started to bud, she wore mainly dresses so that no one would mistake her for a boy. Nothing shamed her more than being mistaken for a boy. As painful as she found being the chocolate brown, kinky-headed child in a family of many light-skinned, curly-haired cousins (she confessed this to me years later), being mistaken for a boy was much worse. Though she couldn’t have articulated it then, being seen as a boy meant that who she felt herself to be inside, the delicate, aching, girl-child reaching through the haze that seemed always to surround her, had no chance at all of being seen.

I think it must always have been so hard to be Pearl. I am trying to remember.
Posted by 37paddington at 9:54 AM 1 comment: 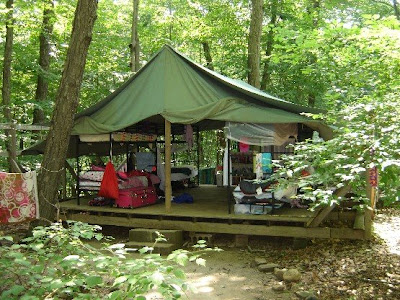 Two weekends ago, we spent the day in the woods with our son and daughter during their camp's visiting day. Soon after we arrived, I was in my daughter's tent (see photo above), watching her to sort her rather mud-caked laundry so that she could run it down a rocky wooded hillside to the unit director before we left the camp to resupply at Walmart and have lunch in the nearest town.
Outside, I heard one of the girls in her unit sing out, "Hey, a snake!" She was standing a few feet from my daughter's tent, next to a stand of trees roughly equidistant from several other girls' tents. In the next moment, five or six girls, including my daughter jumped from the raised wooden platforms of their tents and raced over to see the snake, which was burrowing into a hole that had previously been disguised by fallen leaves. They oohed and ahhhed and one of them even picked up the poor thing, so that it curled around her fist and forearm as the others yelled at her to let it go, and not a single one of them was afraid.
They didn't seem the slightest bit worried about a snake mere feet away from where they rested their heads at night. It was all just another day in the woods for them.
My husband explained to me that the snakes in this region are not poisonous, so the girls had nothing to fear. They obviously knew that already. Still, I was thoroughly impressed by them.
Posted by 37paddington at 3:55 PM No comments: 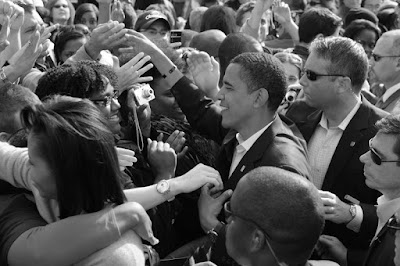 Today is our President's birthday. I reminded my mom of this as we talked on the phone this morning. She said, "Really? I must say an extra prayer for him. I love him so much. He is like my own son." Despite the noise and knee-jerk opposition from factions on the political right, there continues to be so much love and pride and good feeling pouring out for our president. I believe this is based on the core decency that most people sense in the man. All six of my aunts, every one of them past 80, pray for him every single day. I do hope all the prayers going up for him form a field of protection around him and his family as he strives to do that difficult job the best way he knows how. Happy Birthday, Barack! I guess we're on a first name basis now that my mom has adopted you as her spiritual son. (Photo by Peter Turnley)
Posted by 37paddington at 10:29 AM No comments: