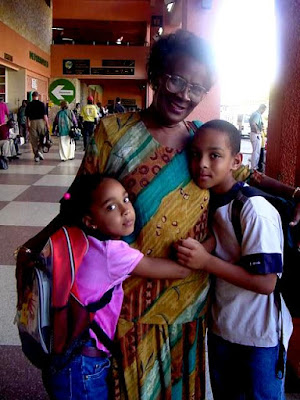 My husband's mom, whom my children called Nana, died tonight. If only we knew the last time we would see someone was the last time. If only we knew we wouldn't have another chance to hug that person, laugh with them, pamper them, let them know how much they are loved. Maybe we would do it better if we knew it was the last time. My mother-in-law had been in the hospital for going on three weeks, but the doctor kept assuring us her condition wasn't life threatening. And yet, she kept declining. Today at about 5 pm she slipped into a coma. An hour later, she left us for good. There are no words. So here is a picture of her with my kids when they were younger. She was so beloved.
Posted by 37paddington at 10:59 PM 5 comments:

Their Adventure (Not Mine)

I was in agony. My two kids and Gabby, a friend of my daughter, were stuck in the Puerto Rico airport in transit to St. Lucia, where they will spend two weeks with my mom. Every summer since my children were five and three, they and their cousins have spent a portion of the summer at their grandmother's house next to the beach in St. Lucia. Last summer was the first year they didn't make it there, and they were all determined not to let that happen again this year. Which is how they came to be in transit in Puerto Rico on Saturday night.
My son called to say their connecting flight had been delayed, its departure pushed back from 7 to 9 p.m., then 11, then midnight. Then came the question of whether the flight would even leave that night, which meant the kids would either camp out overnight in the airport (not so bad in a large city terminal stateside, but not so great in the islands, where the airports close down but for the cleaning crew by midnight), or take an offered hotel voucher and find themselves a place to sleep. "I see a hotel across the street," my 17-year-old son told me on the phone. That didn't comfort me at all. What kind of hotel? And would the girls, two lovely 15-year-olds experimenting with head-turning fashion, be targeted for the lack of adults in their company?
Yes, my noisy mother-brain was clattering off the rails. I knew the airport in St. Lucia also closed down at midnight. Yet in St. Lucia, my mother waited calmly. "Don't worry, they will be safe," she said, knowing exactly where my brain was careening to. "I'm sure the airport will stay open for them. And Ozzie and Zai say they will meet the flight no matter what time it comes in." There is a saying in the islands, "Good frien' better than pocket money." Ozzie and Zai are two of my mother's dearest friends in St. Lucia. In that moment, I was insanely grateful for them.
Back in New York, my husband calmly played with his iPhone apps, awaiting for the outcome. "Relax," he told me periodically. "They will be fine." In Puerto Rico, my son (the other person in our family whom I suspect knows what it is to wrestle with a noisy brain) stationed himself by the gate so he wouldn't miss any updates, and sent the girls to find food. Where did they go? I peppered him. Are they safe? "I have no idea," he said with mock sang froid.
Fortunately, New York cell phones work in Puerto Rico. I called my daughter. She and Gabby were giggling like 9-year-olds as she answered. Where are you? "In a McDonald's eating." Inside the airport? "No, outside, but not too far. Oh, mom, ____ is calling on the other line. He might have information." So I hung up. I knew my son had charged her to answer her phone if he called. And I guessed he was calling to make sure they were alright; my panic had no doubt panicked him. After an interval, I called my daughter back. "We're headed back to the gate now," she said. "We're walking through a tunnel." Are there many people around? "Um, not really. The airport is kind of closed."
Can you say, imagination running riot? Of course, they made it back to the security area without incident. And shortly after, the airline made the decision to depart at midnight rather than wait till morning. The airport in St. Lucia agreed to stay open to receive the flight. My mom's friends were apprised of the new arrival time.
At that point, my husband turned over and went to sleep. I lay awake, checking the clock, holding my breath, as if my tight-lipped force of will would keep the plane in the sky and land my three children safely (because Gabby was my child, too, at that moment). Finally at 2:36 a.m. my daughter sent me the best text ever.
"hahaha. here. i'm so happy."
"Me too!" I texted back.
Half an hour later, my son called from my mom's house. "Thank you, son," I told him. "For what?" he asked. "I know you were the one holding it down," I replied. "Yes," he laughed. "The girls were on an adventure." He kindly didn't add, But I had you to contend with.
Posted by 37paddington at 11:58 AM 3 comments:

All in My Head

I'm having the odd experience of writing posts in my mind, but never quite getting them onto the page.

My cousin from Virginia is in town for our college reunion, her twenty-fifth and my thirtieth. She going to the dinners and events and catching up with friends. I'm taking a pass. But since she's staying with us, I'll have to play host to her friends all the same. But for my rundown house, it's not too stressful. This cousin is like a sister.

I'm also playing host to an aunt and uncle who are staying in my mom's apartment while my aunt gets medical treatment in New York. This is the baby of the sisters, at 80 years old. Had to get the apartment ready, clean, change linens, lay in food. My son helped. He cleaned the bathroom and washed the towels and sheets and swiffered the hardwood floor. Yesterday, he got sick again. I think he never really got well. He spent all of today sleeping on the couch. I came home early from work to pamper him. He felt too weak all day to get up and make himself some food. Today, he seems a little better, but not much. I think his body is rebelling from being pushed so hard all year. It's insisting he lie still.

My daughter is in the midst of final exams. Tonight she tried to apologize in advance for failing History. I told her she can't think like that the day before the test, it would mean she'd given up. Just go in there and do your level best and then forget about it. She had studied all day (she said), so tonight, we watched So You Think You Can Dance together and then she went to bed. I felt slightly guilty for not sending her to study some more, but only slightly. She has a B+ in the course so far this quarter. Hopefully the exam won't wreck that too badly.

My husband has been in his cave, which is how I describe his moods. He goes in that dark place when he's processing something, or when he's trying not to process something. He becomes blank and uncommunicative. My instinct is to lob dynamite at the cave to see if there might be signs of life inside. Always a bad move. It makes him burrow deeper. Eventually I manage to pull back, and eventually he sticks his head out. Eventually, he returns.

I'm happy to say he has returned. Secretly, I think he's as melancholy as I am that 18 years of raising our boy are almost at an end. They have shared so much. He will miss him mightily when he leaves for college this August.

My daughter wants to go to the country house (with pool) of one of her friends this Friday, returning Saturday evening. Four of them, all pals since grade school, would take the jitney out together. My mother would never let me do such a thing in the middle of final exams. She would disapprove of my even asking the question. But I think I will tell our daughter yes. The worst of her finals, English, History and Physics, will be behind her. Only Math and Spanish will be left. She's in ninth grade for heaven's sake. Let her have some fun. Is that irresponsible parenting?

None of this, by the way, is the post I was writing in my head.
July 1: My daughter's report card just came and she made the honor roll for the quarter AND for the school year. Maybe this will help her remember never to count herself out.
Posted by 37paddington at 12:30 AM No comments: 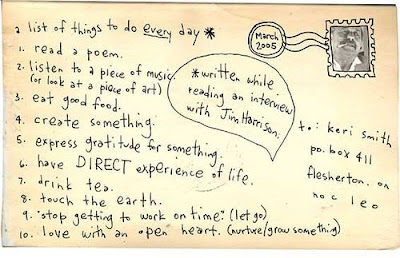 The postcard above was found on tumblr.
Posted by 37paddington at 11:07 AM No comments:

Does your hair feel the same as mine? 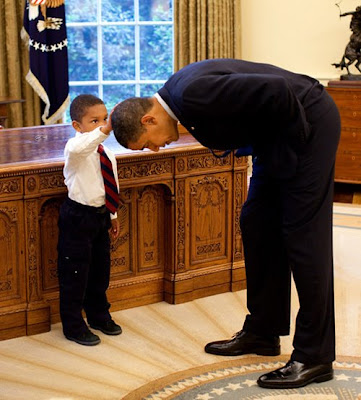 The President apparently offered his head so the child of a staffer could check if their hair felt the same way. Sweet. (Photo by Pete Souza)
Posted by 37paddington at 5:49 PM 5 comments: