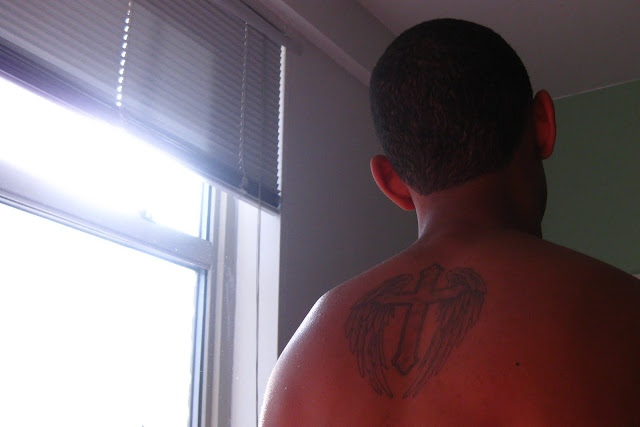 My son is home from college for Thanksgiving week. He arrived this morning around 8, looking happy and hale, with a tattoo in the center of his back, between his shoulder blades.

After an hour or so of chit-chatting, he whipped off his shirt, then sat with a quizzical smile on his face, waiting for us to notice. I saw something, a shadow on his back, and asked him to turn around. He did readily, his expression proud and nervous. I guessed he was proud of his art but was nervous about what we would say, because he still cares.

His tat was his birthday present to himself, which he actually had done on his dad's birthday. It is a black and white piece, a stone cross surrounded by angel wings. It is not too big, not too small, nicely centered left to right, not too high, perfectly placed. And the art is lovely, not at all cartoonish, done by a steady, professional hand.

"It's beautiful," I said, and he melted.

"Ahh, that's the word I was hoping for!" he said, and then he hugged me.

"What does it mean to you?" I asked him.

"It's a symbol of faith," he said, "of the way you raised me. A reminder that God has my back."

I thought of my dad, and my husband's mom, my uncles, all the loved ones on the other side, watching over him. I believe he thinks of them, too.

I spoiled it a little by asking him not to get any tats on his neck or forearms, nowhere visible in job interview clothes. I even noted I could be just fine with this one tat on his perfect body that I birthed. My husband, at that point, told me (nicely) to back off, cool it. My son just smiled. His mom is his mom, and that was okay with him at that moment.

I was touched, really, that it mattered to him that we liked it, even though I know, if we had given him grief, he would have shrugged and pretended he didn't care.