And there he goes. Our son swept in from London bearing gifts from his girlfriend, and some from him too, jars of spa goodies and a polished stone with mystic properties for me, English chocolates and a recipe journal for his sister, and a Union Jack apron and Arsenal scarf for his dad, who donned them immediately and then walked around the house wearing them all night. Love that man. Then our boy wanted to show his dad an amazing play he'd seen by Arsenal striker Thierry Henry (did I mention they are Arsenal soccer fans?). As the evening went on our intrepid traveler told us about attending a performance of Robin Hood at the renovated Globe theater in Stratford-on-Avon, Shakespeare's town, and how the stage sloped up toward the back till it was almost vertical, and how there was a real pond in the middle of the set, and everything else fantastic and fond about his trip.
Our boy swept out again at 7 a.m. this morning to catch the 8 a.m. bus back to his college so he can make his 4 p.m. track practice. I hugged him and hugged my husband who had offered to drive him to the bus station and hugged my girl who left at the same time for school. Then I came back into my room in the quiet house and sat on my bed looking at the photo of my children that is framed on my side table. They are 20 and 17 now. In the photo they are 8 and 5, and my son is reading the Andrew Salkey book Hurricane to his sister and I swear it was just yesterday. 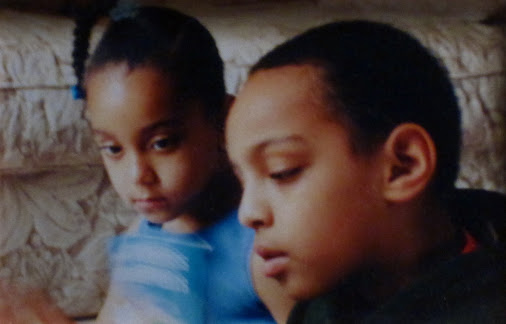 Here's what else happened yesterday. This is such a New York story, one that could have had many endings. My daughter got off the subway at her stop last night and was walking along the platform to the exit when she saw two small children, she thought they were about 4 and 5, banging on the closing door of the train and screaming "Open the door!" At the window was an Indian woman in a bright sari, her face a mask of horror as she banged on the glass from inside the train. The train pulled away, leaving the two children running alongside it on the platform, the little girl howling, the little boy in frantic silence. My daughter went over to them and guided them from the edge of the platform and asked them what was wrong. Apparently they were traveling with their mother who had not managed to get off the train before the doors closed.

My daughter says she knew what she had to do because she remembered me telling her when she was small that if this ever happened to her, she should find an older lady who would stay with her until I came back to find her. She said to the children, "Don't worry, your mom will come back for you. I'll stay with you till she gets here." The girl sobbed and sobbed and the boy stared at her in terror and didn't utter a word. A man came up and asked if he could help. My daughter said everything was okay and he walked away. An older woman came up and told the children sternly that all this crying was not necessary. My daughter looked at her in disbelief. "Really?" she said, telling me the story, her voice full of 17-year-old attitude and conviction. "Did that women really think tears were not a completely appropriate reaction for a 5 year-old-girl who was lost in a subway at night?" The woman walked away.

Another woman, thirtyish, came over. She said she had children the same age and offered to stay with my daughter and the two lost children until their mother returned. Then the subway booth agent, alerted by the little girl's screaming sobs, appeared. When the situation was explained, he went back to the booth and called the conductor of the train that had just left the station. He then told my daughter and the woman that the children's mother was waiting for them at the next stop, to put the children on the train and she would meet them. My daughter said, "I'll go with them." The woman said, "I'll go too."

So they took the two children to the next stop where their mother fell on them with tears and hugs as soon as the subway doors opened. My daughter and the woman quietly walked away. They had to exit the station and cross the street and pay another fare to get to the train that would take them back downtown. The children's mother did not even see them. Perhaps she thought the children arrived alone. It doesn't matter. She may not have thanked my daughter and the woman, but I know, and my daughter knows, that they were there for those lost children last night. They helped this New York story have a happily-ever-after ending.