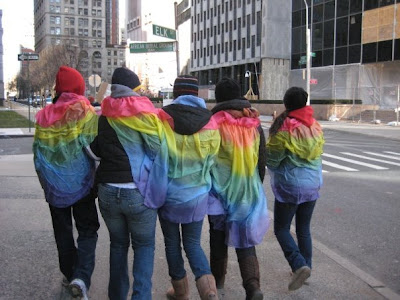 A psychic once told me my daughter would be attracted to causes, that I would see her start to become passionate about things by the time she was six. Indeed, when she was six, she and her classmates marched and wrote to the president and gave interviews on ABC News to protest the bombing practice that was taking place in Vieques, Puerto Rico. When the U.S. military abandoned that test site, more because they had become strenuously engaged in Iraq than because they cared about the local children who were being poisoned by the Vieques explosions, you could not have convinced my daughter that it was not the efforts of her class that had brought about the cease fire.

True, her parents did send her to a school that would nurture that seed of activism within her. Supported thus, she and her peers marched to end the war in Iraq when she was 11; wrote and read poetry and prose at a Speak Out Against Hate rally in Central Park when she 12; donned rainbow capes and gave speeches in support of civil rights and gay rights at a march she helped organize when she was 13; painted murals and did clean-up at a camp for seriously ill children and their families when she was 14. Today, she is in New Jersey, plunging into the icy ocean to help raise money for that camp, so that children with life-threatening illnesses can spend an idyllic week in a place called Camp Sunshine.

The psychic also told me that I need not worry about whether I would be able to provide what my children needed to find their path. He said that whatever I did not offer, others would step forward to provide. Enter my friend Debbie, whose daughter and mine have been classmates and beloved friends since they were four and five. Debbie drove our daughters and two more of their friends to that oceanside town in New Jersey last night, so that they could all run into the icy sea together this morning for a worthy cause.
I'm grateful to Debbie and the Camp Sunshine crew, my daughter's elementary and middle school teachers and peers, their parents, my parents, my husband, my son, all the people who are helping to set my girl on the path to being whomever she wants to be.
Ditto all the people who are helping my son become whomever he wants to be.
For the record, I don't consult psychics anymore. It was just a phase I went through, before I realized I didn't really want to think I knew what was coming. But it strikes me still how many things those psychics got right.
Posted by 37paddington at 11:42 AM