Freedom is an act

"During the Civil Rights Movement, our struggle was not about politics. It was about seeing a philosophy made manifest in our society that recognized the inextricable connection we have to each other. Those ideals represent what is eternally real and they are still true today, though they have receded from the forefront of American imagination. Yes, the election of Obama represented a significant step, but as the following election and all the days beyond that high point in American history have proved, it was not an ending. It was not even a beginning; it was one important step on a continuum of change. It was a major downpayment on the fulfillment of a dream. It was another milestone on our nation's road to freedom. But we must accept one central truth as participants in a democracy: Freedom is not a state; it is an act. It is not some enchanted garden perched high on a distant plateau where we can finally sit down and rest. Freedom is the continuous action we all must take, and each generation must do its part to create an even more fair, more just society. The work of love, peace, and justice will always be necessary, until their realism and their imperative takes hold of our imagination, crowds out any dream of hatred and revenge, and fills up our existence with their power."

—Rep. John Lewis in Across that Bridge: A Vision for Change and the Future of America 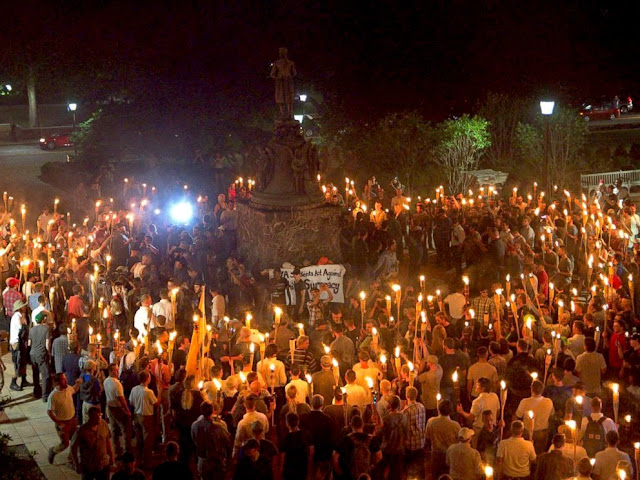 A handful of students stood at the center of the white supremacists' torchlit rally in Charlottesville last weekend, decrying the hate. The hostile crowd pressed in on them, shouting epithets, but the students did not flinch. They held their "Act Against White Supremacy" banner high. I was afraid for them, and I loved them, too. This is courage. This is freedom, caught in the act.
Posted by 37paddington at 6:06 PM