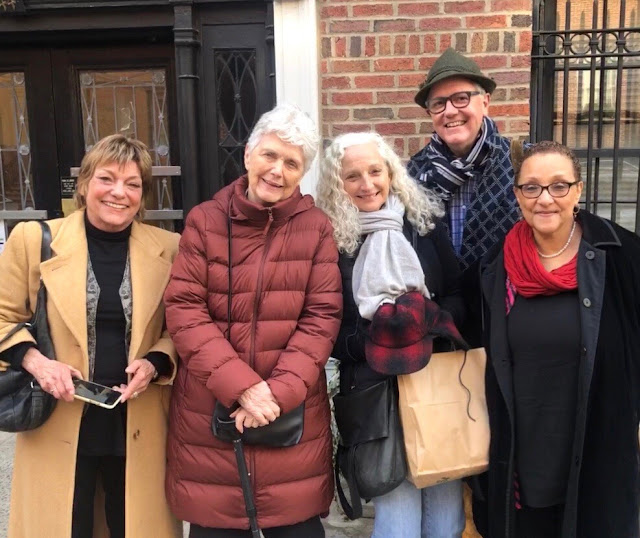 Last Saturday, I joined several of my former LIFE magazine colleagues for lunch, as many of them had traveled to the city from as far away as California and Bangkok to attend a memorial service for the venerable Dick Stolley, founder of People Magazine and former managing editor of LIFE, and the man who, as a young journalist had been the one to track down and secure the famous Zapruder film of John F. Kennedy's assassination, the one we've seen again and again on history reels, of Jackie Kennedy in her pink suit and pearls with her husband's bloody head staining everything red. 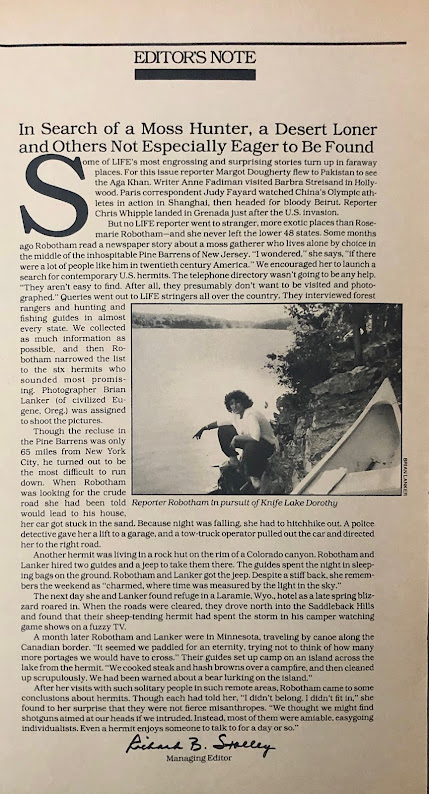 I didn't go to the memorial, in part because even though Dick had been my boss and had been a legendary newsman, the Friday of his service fell on the seventh anniversary of my mother's death. Seven years already. Some anniversaries hit harder than others. This year, I just wanted to spend the day quietly. Both my children called me to make sure I was okay. I was fine, and so touched that they remembered their grandmother on that day. We all shared lovely reminiscences about her.

Anyway, on Saturday, there was a plan for some of the reporters who had worked for one particular editor, Mary Steinbauer, to get together with her at a restaurant near her home in the Village. There would be six of us, two of whom I hadn't seen since leaving LIFE when I was twenty-nine, and the other three I had seen only twice in the intervening years, once at a reunion of the old staff in November 2013, and again when we got together for lunch with Mary and our beloved former Chief of Research, June Omura Goldberg, the following day.

We reporters were a wild bunch back then. At lunch on Saturday, we remarked on the fact that we were not only work colleagues, but also each other's social group, which was to be expected since we worked till ten and eleven at night, or on closing nights, two or three in the morning, waiting for our stories to come through the editing rounds, and decamping to each other's homes to imbibe and smoke and be giddy with exhaustion and abandon afterward. My fellow reporters, two in particular, were my best friends during those years. We were each other's everything for a while, because if we weren't burning the midnight oil in the offices on the thirty-first floor of the Time Life Building, we would be traveling with an assigned photographer for weeks at a stretch to report stories and create photo essays for the magazine. We had so little time left over to develop outside friendships. I have never worked more intimately with another group of people since. 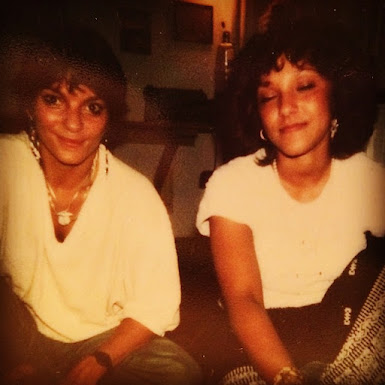 All that to say, as socially anxious as I was to show up on Saturday, as soon as I arrived I was at ease. The conversation flowed, so many memories were dredged up, and we all gave Mary her flowers for the calm way she had guided us excitable young whippersnappers back then, when we would call from the road with unforeseen challenges to be solved or on-the-fly plans to be approved. She demurred in her usual gracious way and said, "I got so much credit for the stories we did, but I always told people, it was you reporters who made them happen. All I did was say, 'Go.'" She shared that she had turned over all her papers from her decades as a senior editor and then Assistant Managing Editor of LIFE to the New York Historical Society, so if we ever wanted to visit our stories and the voluminous files we created in service to each one, we could find them there.

Mary was famous for taking us all out to long margarita-soaked lunches on the day after a big story or a special issue shipped, and we recreated that vibe on Saturday, toasting with round after round of margaritas. Having met up at noon, we were still sitting there at four that afternoon, calling back one riotous memory after another. I loved the way each person around the table had evolved to become even more fully themselves. Each of my lunch companions could have been the inspiration for a fascinating literary character in a Truman Capote or Joan Didion narrative. It was close to five when we finally roused ourselves and walked Mary back to her apartment building before the rest of us jumped in a cab and regrouped at another former staffer's home on the Upper West Side. It reminded me of the way we used to roam in clusters back in the day, going from one gathering place to the next, one person's house to another, loath to let the party end. 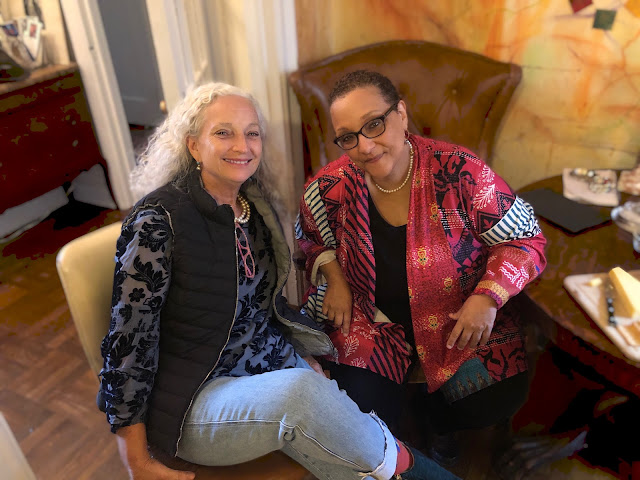 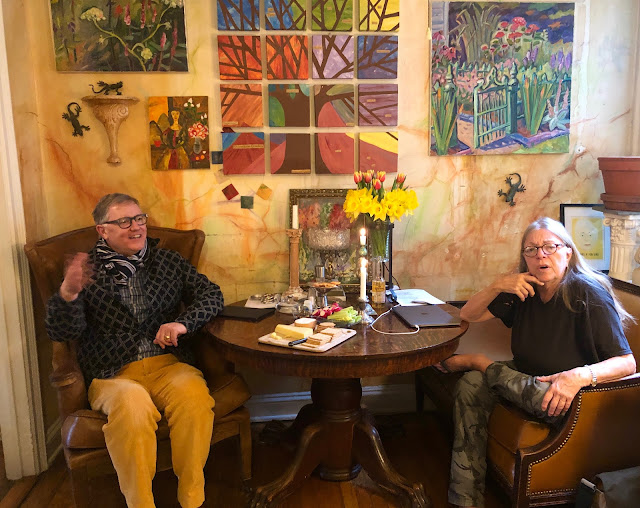 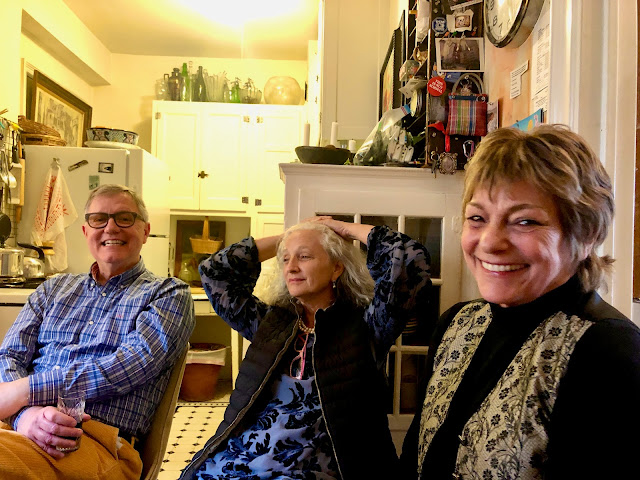 We are all older now, so the party on Saturday did end. I went home to my husband as darkness fell, all the memories we unearthed sticking to me, calling back the way I used to be, reckless and footloose, jumping on planes to far flung places at a moment's notice, anxious before every new adventure, but feeling the fear and wrestling each new story to the page anyway. 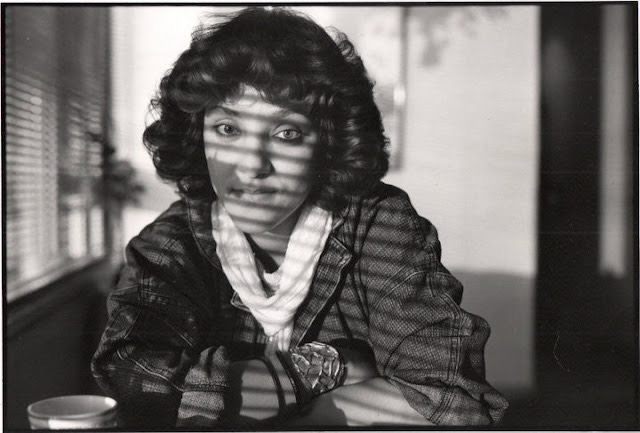 This photo was taken as the sun came up in Fort Wayne, Indiana, where photographer Michael O'Brien and I were doing a series on "New Americans," recent immigrants who were making a go of life in their new country. In Fort Wayne, we reported on a large Ethiopian family who had opened a parachute factory, after a harrowing wartime escape from their homeland. Michael was my absolute favorite photographer; we worked so well together that our editors paired us on numerous stories, and his wife, also a reporter, was one of my closest friends. He liked the light coming in through the blinds that morning as we sipped coffee in the airport cafe while waiting for our early morning flight home. So he raised his camera and took this shot.

As the years accrue, it hardly seems real anymore that I lived all those stories, that my young life was so enriched by the people I encountered from all walks. But on Saturday with my old LIFE crew, I touched again the young woman I was, reporting stories in almost every state in the union and navigating to places as far away as the Falkland Islands, now called the Malvinas, the southernmost inhabited land mass in the world, and yes, it was me who went all those places and met all those people and built enough trust with them that they allowed a young Black woman who grew up in Jamaica and came to New York as a college student to literally camp out in their lives. My God, I really did that. Memory is an elusive shimmery thing.