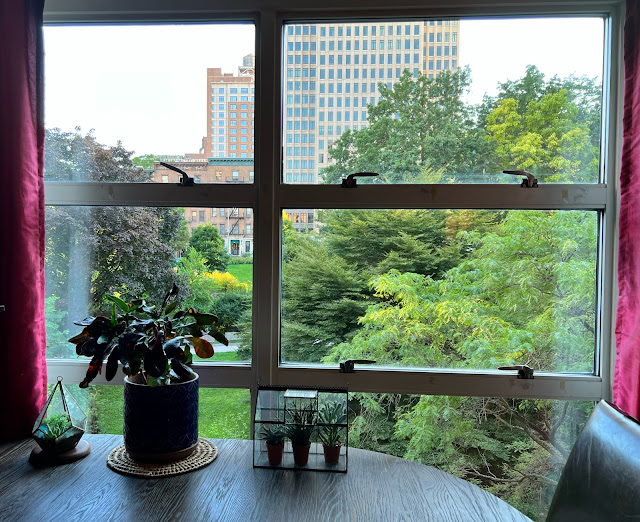 I have been away working. I had a big job and not enough time to do it, and so I had my head down day and night, doing it. Ninety-one pages double spaced. An entire proposal, the selling document to be shopped to publishers, complete with an overview, sample chapter, and chapter summaries, the whole arc of the book brought into view. I did it. And in only three short weeks, this labor that normally takes two solid months to get it right. I did it. Even though we had house guests. Even though I didn't have enough time for connections to make themselves in the background of living, ideas to occur organically. I gave myself the deadline of my wedding anniversary, August 23, to complete an entire draft and send to my subject for her review, corrections, changes. My subject texted me yesterday that she is very happy with what she is reading so far, and we set a time for this weekend for me to get her changes by phone. That will allow me to have a clean final to turn in to the agent on the actual due date of August 31. Look ma, I'm doing it!

So that's why I've been scarce in these parts. And now, I don't even know how to write a post anymore. The problem with not writing here regularly is all the thoughts get tangled into a great big mass, all the things you noticed and wanted to share, all the passing magic of the world, and I can't seem to pick it all apart, make it march in coherent sentences. But this is me, making a start.

That was my view as I worked, and since we were having company from home, as in my first and still forever home Jamaica, I finally had the windows cleaned. The view suddenly sparkled, the greens deeper and more varied than before. My brother and his ex brought my nephew to New York for college, the same one my son and my nieces Leisa and Dani went to by the way. It seems we have a legacy school in the family, and a legacy town, since my daughter and her love went to college in the same hippy dippy upstate college town, to the school on the opposite hill. It was lovely to have my family here for a week, my brother and his ex are very congenial, a gift from her to him if you ask me, because charming and entertaining as he is, he doesn't really deserve her ease. But it makes me happy, because her ease says she is beyond being hurt by him anymore, she has moved on in all the most necessary and heart healing ways, and now they can co-parent together without ripping pieces from their kids. Everyone can laugh together, and even make rueful jokes, and somehow it still feels like a family. I credit her entirely. She and I had deep conversations in the mornings over coffee, including about never before mentioned things, before I dived back into the digital blue world, roaming inside my head, coaxing the ideas to channel themselves through my fingers.

There was a method to my madness in choosing my anniversary as the date I would deliver the first draft of the proposal. It meant I could celebrate that evening with my beloveds. Both my kids and their loves came over, and we toasted each other with Prosecco that my son brought. Someone had given him and his fianceé the bottle to toast themselves on the night they will marry less than a month from now. They decided to toast us with the bottle instead. "What better way to celebrate a new marriage than by toasting a long time one," our son said. The picture below is of the house after they all went home. I didn't get a good picture of us all, I was probably still too distracted and in my head, but it was an easygoing vibe with five of my favorite people in the world.

And now, I have looked fear in the face and hopefully dodged failure once more, and I've even managed to write some paragraphs here this morning. Hello, hello, my dear friends. How I have missed you. 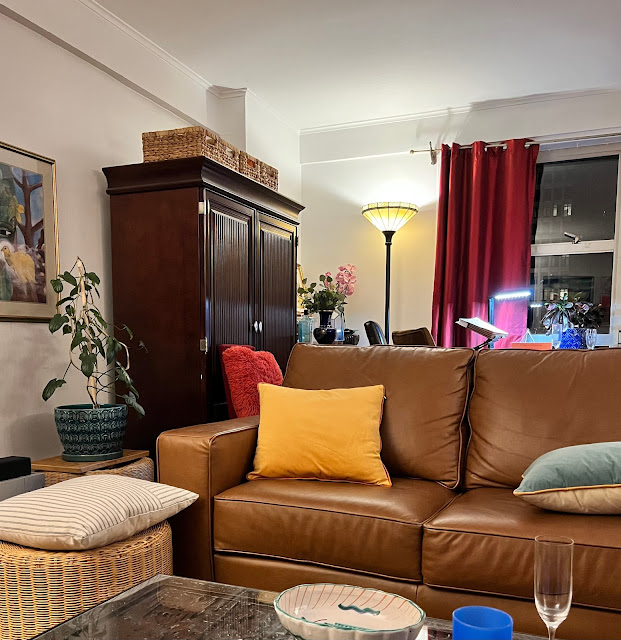