This night is a gauntlet every year, ever since my kids got old enough to go off on their own. My girl just left here with two of her friends, all of them in their tiny black tube skirts and high heel black boots and ripped black tights and faces sweet as can be, their child faces still visible under mascara and liner artfully applied, silver hoop earrings catching the light as they twirl, checking outfits from all angles, excitement and familiar camaraderie and teenage life force off the charts, and now they're off to meet another friend for dinner, then meeting up with two more to go to a party downtown, and here's where I hold my breath, because no matter what they tell me, that party could be any kind of scene, and that's where I have to trust their good judgement, remember they're off to college in a few short months, remember, as Scott says, to let go of the pretense that the steering wheel I am clutching onto is connected to any kind of gear at all.

Come to think of it, my husband also says that. When I'm about to go into control freak mode over something related to our kids,  he'll often say, You might think you have your hands on the wheel and you're steering the vehicle, but what you don't see is that they disconnected the gears a while ago. He'll have something to say about the fact that I heard it like new from someone else today, but then Scott connected it to visuals, the tiger with the monkey on his back, representing the conscious and unconscious minds. Go visit the tearful dishwasher for a new year's eve post to set your year up just right, and to discover what the heck I'm talking about. 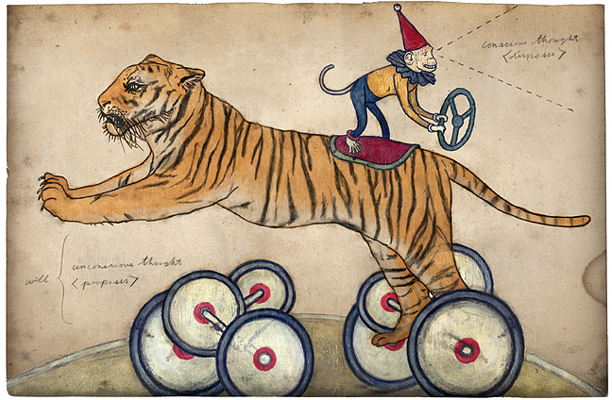 So yeah. The girls are off on their adventures. I should have taken a picture but I was too busy proffering cab money and giving instructions to call or text me if the plan changes, and asking if the cell phones were charged, and determining who exactly was going to which place, because one of their number is going to a different party, and then they're going to meet up after and go for after-midnight breakfast, their new year tradition by now, and then sleep at the house of my friend Isabella, whose lovely daughter is one of the charming and fabulously decked out crew.

My son, meanwhile is across the pond, in England spending new year's eve with his girlfriend. He left two days ago, looking like a man of the world, plane ticket in hand that he had paid for by working many lifeguarding stints for his college swim team, hoarding his pennies and checking flight prices every day until he had enough. The funny thing is, he's going to be the parent who is just like me, the control freak. Of my children, he was the more calculated one in high school, as I was, so he knows what kids can get up to, as I did. My daughter will be the chilled out one, more like her dad, grooving along philosophically, content to allow the steering wheel illusion to keep us busy in the meanwhile.

Now that the whirlwind of teenage girls has swept out the house, my sweet man and I are lost in our respective books on the Kindle Fires we gave each other for Christmas. I am on the third book of the Hunger Games series, and I'm riveted. He's lost in the age of sail, in some swashbuckling adventure at sea. It's feels peaceful and companionable here, if I don't let myself fall into worrying about events over which I have no control. We're going to eat Chinese food for dinner and then later we will get ourselves  gussied up too, and we'll stroll upstairs to our friends' apartment, where we'll raise a glass with other souls and welcome in the new year. See you on the other side!