A Lesson in Transcending 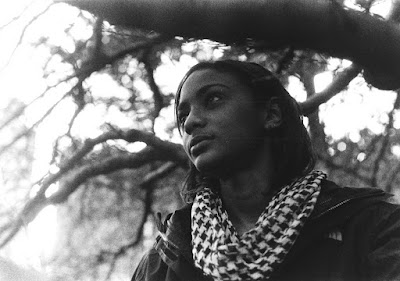 My daughter has a 10th grade English project on transcendentalism. She posed her cousin and friends in various settings in nature, huddled in stairwells with an X of tape over their mouths, against stark brick buildings, awash in sunlight, lying in the grass, and so on. She had chosen to illustrate ten quotes from Thoreau. The above photo of my niece was used to illustrate this quote:

“Every morning was a cheerful invitation to make my life of equal simplicity, and I may say innocence with nature itself."

As part of the project, she had to interpret and explain how each photo applied. This was what she wrote for this one:

"In this photo, my cousin is surrounded by the tree branches. She is connecting back to nature, and simplifying that moment in her life to only the earth and life on it. The trees in nature are such a significant idea in transcendentalism because the goal is to simplify life and be an individual amid a sea of conformity. The trees show this because they have grown from the earth and flourished through many seasons, despite the outside influences. This is a model for the transcendentalist, to be free and grow as a person and defy all the judgments and routines of normal life. Also the branches are bare, showing that there are harsh outside influences that sometimes can change our path in life, however a transcendentalist can still retain individuality because these influences are a natural part of life, and it is our job to be able to stand up to them and grow from them."
I particularly love the sentiment of that last sentence.

I should mention that she took the photos with a 42-year-old Nikkormat SLR film camera and developed and printed the images in the darkroom at her school. The camera is mine, a second-hand beauty given to me by one of my uncles when I was 11 years old. My daughter took it down from a high shelf in the back of my closet. I wasn't even sure it still worked. But it does. I would love to show more of the her transcendentalist series but I'm not clear on whether some of her other subjects would mind their photos being posted, so I'll refrain.
My girl was up till past midnight, meditatively trimming and mounting her photos, and pasting the quotes on the front and the explanations on the back. She'd been going all day, starting with yoga at seven a.m., and back-to-back dance rehersals after school. She didn't get home till seven-thirty tonight, and got right to work on the writing for her project, which took a few hours. Why, I asked, did she wait till the night before it was due? "I couldn't start writing till I knew what photos I wanted to use," she explained, "and I only printed the photos today." Truth be told, she didn't get to any of her other homework tonight, but planned to read history on the 50-minute subway ride to school and do math and Spanish in her free period today. It's one o'clock now, and she just went to bed.

Can I just say, my daughter so impresses me.
Posted by 37paddington at 1:03 AM