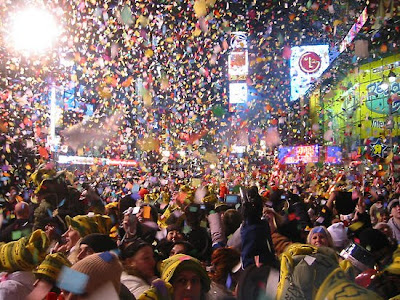 Happy new year all my loves. I can't quite believe it's 2010. I remember being a little girl and calculating how old I would be in the year 2000. It seemed like such science fiction then, so far in the future. And now we are a decade past that. It's going to take me a minute to get my arms around that.

New Year's eve was mixed for our family. My husband and I had a lovely time with friends, who were hosting some of the performers from the Concert for Peace held at the Cathedral of St. John the Divine. There was a rather famous and personally captivating opera singer, her friend the press agent, a sitar and dirigidoo player and her partner who directs a dance troupe, a film producer and her partner who works on women's issues in India, a photographer, another woman who was friendly and lovely, but whose details I don't know, our hosts and us. What a delightful gathering it was! At midnight we hugged and danced and twirled and blew our noisemakers and set off mini firecrackers and wore silly hats and 2010 glasses with little rolling lights, and the opera singer imitated various choreographers' styles to hysterically funny effect, and the dancer twirled scarves and paper streamers and the rest of us clapped and kicked our feet up (literally) and one of the men filmed the proceedings and we drank good champagne and rang in the new year in boisterous style.

Our 16-year-old daughter, meanwhile, was out in the city with four girlfriends. They gathered at one house, then decamped to a second and finally a third. Three parties. We let her do it, praying for an incident-free evening for her, knowing that there were aspects of it that were not within our control. We let her know that we were trusting her to call us if anything gnarly was going down. She stayed in phone contact with us all night, texting us at every move, and she seemed her cheerful, unintoxicated self when we picked her up from her friend's house in a cab at almost 2 a.m. She described how there were two drunk German girls on a subway ride they took earlier in the night. The girls were yelling "Wake up, New York!" and they led a round of happy birthday singing to one of my daughter's friends, with the whole train car joining in. As my daughter tells it, the night was just rambling fun, at least for her and her little group of innocents.

For our son and one of his friends, the night wasn't quite as sanguine as for my daughter and us. They were going to a party in Brooklyn. They came up out of the train station, looked around and found themselves in an unfamiliar and not great neighborhood. Heads down against the light hail, they walked towards the street where the party was being held. On the way, a police car pulled up next to them. The cop inside, a White guy, rolled down the window and said to the two Black boys on the sidewalk, "Where the fuck do you boys think you're going? Do you know where the fuck you are?"

At first, they thought he was being hostile and gave subversively sarcastic answers, but as the cop continued to question them, it began to dawn on both my son and his friend that he might actually be looking out for them. "You two college boys are going to get yourselves shot and killed out here tonight," he told them. "I'd advise you to get to your party and lock the door or turn around and go home." The boys went ahead to the party, noting that the cop car didn't move from the block till they were inside. At the party, they looked around, decided "the party was whack anyway," and headed back out into the night, to the subway station, where they took the train back to the city. They decided to get off in Times Square and watch the ball drop with the rest of the hordes, then they got something to eat and came back to our home. We walked in to our apartment shortly after 2 a.m. to see them sitting there, watching The Matrix.

"Oh, we have stories," my son's friend said. He nudged our son with an elbow. "Tell them."

My son started recounting what happened, sanitizing the cop's language. "No," his friend said, "Give the tone of voice, use the actual words he used. Tell them the real story." So my son did, with his friend adding details.

"How did that make you feel?" I asked the boys when they were done.

My son shrugged. "Like that cop knew something and didn't want to have to clean our dead bodies off the street," he said.

Considering it now, I choose to think that cop might have been a guardian angel in profane disguise protecting our boys on New Years eve night. We'll never know for sure. For which I am eternally grateful.
Posted by 37paddington at 10:15 AM