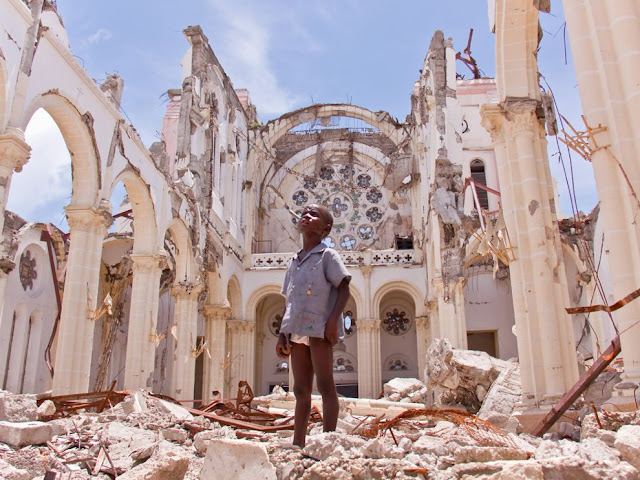 A powerful earthquake, 7.0 on the Richter scale, reduced Port au Prince, Haiti to heaps of sticks and concrete rubble as evening fell on January 12, 2010. It happened in an instant. Some 200,000 people are thought to have perished, a number that I can neither fathom nor bear.

There are sorrowing hearts everywhere. In one photo that I saw, a man holds the head of his brother-in-law, whose wife, three months pregnant, was killed by the collapse of a four-story building during the massive earthquake. The man is sobbing as if grief has literally hollowed him out. I wonder how he will go on.

The National Palace, once a grand two-story structure, sits destroyed, it's top floor pancaked into the ground floor like a crushed wedding cake. Outside its gates, the newly homeless gather. The parliament building collapsed with those who run the country inside. The hospitals collapsed. The cathedral and churches collapsed. The priests and nuns are dead. UN relief workers have died, as have American college students doing humanitarian work in Haiti. Babies awaiting adoption were buried inside their orphanages. Every Haitian person knows someone who died or remains unaccounted for.

I look into the faces of the reporters covering this story, and I see a haunted, shell shocked expression, a soul-weariness that I have never seen before, even on the faces of journalists in war zones with shells exploding behind them. In Haiti, the journalists are witnessing a horror that defies imagination. Anderson Cooper said their camera lenses were too small to capture what had happened there. So great was the need of the Haitians that Dr. Sanjay Gupta quit being a correspondent to practice medicine in the field hospital he was reporting on. He ministered to survivors all through the night, and felt humbled and grateful in the morning to have kept people alive. You can tell the losses are starting to feel personal to the reporters on the ground. You can see it in the light that has gone dim in their eyes.

I asked my husband why people didn't walk into the hills to other villages where there was food and water. He said, "How do you walk when your legs are broken?" And he said, "How do you leave when your child or your mother might be buried but still alive under the concrete?"

I had more photos up on this post before, but I took them down. They were too upsetting to look at every time I logged on to this blog. I know I should make myself see the pictures, that it is a kind of moral cowardice to turn away. But the mental images are vivid enough.

The simplest way to give to the Red Cross is to text the word "Haiti" to 90999. The Red Cross will then charge $10 to your cell phone bill and use the donation to help the survivors. They've raised about $10 million from these $10 donations so far, which is heartening. But they will need more.
Posted by 37paddington at 1:14 PM