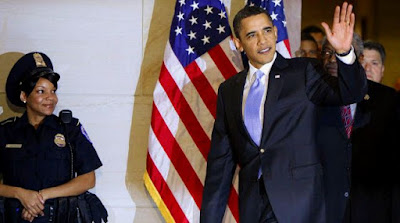 For 65 years presidents have tried and failed to pass healthcare reform. Every single one knew that the system was broken, that the insurance companies had the American people over a proverbial barrel. This president is the first to achieve what he said he was going to do.
Pundits like Joe Scarborough and Pat Buchannan are crowing about the partisan nature of the vote, the ugliness of the politics. I think they're being disingenuous. Of course it was partisan. Of course it was ugly. That's what you get when the other side has no agenda other than to see you fail. When they have no interest in the needs of the people, only in their own reelection. When the protesters gathered use their first amendment protections to yell "nigger" and "faggot" at lawmakers walking into the Capitol.
Obama finally got past the bipartisan fairy tale. And the Democratics finally stepped up. This is historic. One former Bush speechwriter predicted it would be the GOP's waterloo. I don't know about that, but I hope the Democrats who voted for this bill run on the offensive in November's mid terms elections. I hope they hold healthcare reform up as the accomplishment that it truly is. I know the bill isn't perfect, but it gets us a long way to where we need to go. It's a start, a moment of vision and brilliance in the murky self-interest that is Washington.
And now the Republicans, the tea baggers, the far-right wingnuts are vowing to repeal the bill. Really? As Daily Kos asks: "What do you want to repeal first? Not discriminating against children with pre-existing conditions? Allowing children to stay on their parents insurance until they're 26? Insurance companies not being allowed to drop you if you get sick or capping the amount they'll pay if you have a catastrophic illness? Which ones are Republicans against? In other words, bring it on."
Gosh, I'm proud.
Posted by 37paddington at 12:19 PM