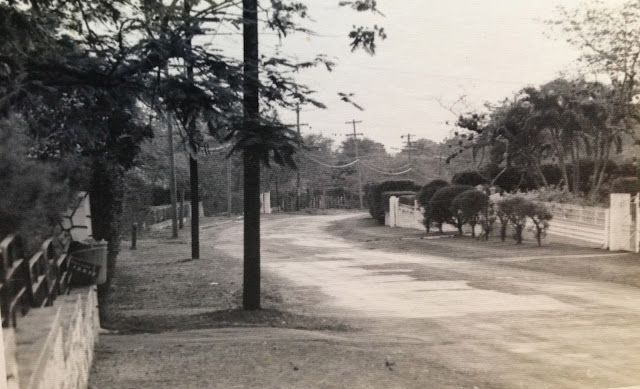 That street above, it's Paddington Terrace, taken from the gate of number 37, where I lived in the last few years before I left my home in Kingston, Jamaica and moved to another country for good. I didn't know when I was leaving to attend college in New York City that I would never again live in Jamaica. I didn't know that just a few years hence, my parents would relocate to the Eastern Caribbean and the house I think of as my childhood home would be razed so that a developer could put up townhouses. I didn't realize I would never again walk barefoot on that broken asphalt road from my house to my best friend Hilary's house, just around the curve you see there, but perhaps I did already know that all of the memories we made on that street would fuel me for the rest of my life.

I'm thinking this morning about the way certain experiences can dominate whole swaths of a life, and then suddenly, usually without warning, an era ends and a new one begins, and we have no choice but to make peace with what's past. If we're wise we will find a way to open ourselves to its gifts, even the ones that come rudely wrapped in sandpaper, as my cousin Helen, a life coach and intuitive, likes to say.

I ended an era last night. After 19 years at a women's magazine, I have crossed the threshold to a new stage. The company and I have come to terms, and last night, several of my former colleagues feted me at a venue reserved expressly for that purpose. I realized, as I was getting ready, that other than my wedding and baby showers, I couldn't recall ever preparing to attend an event held just for me. I know I had birthday parties when I was small, but as an adult, I have seldom been the focus of a celebration, and it was deeply uncomfortable to anticipate.

The experience itself was humbling. All the people I loved best at my former job were there, and as I walked into the elegantly appointed room they had reserved, I was enveloped in hugs and laughs and tears. Huge baskets of presents were on the center table, and everyone seemed genuinely happy to see me. I realized suddenly that I had not allowed them, or myself, closure. After being told my job had been eliminated, at the end of the day on Friday the thirteenth, I went straight from my editor-in-chief's office to meet with the HR person, and then I went home. I went back to the office two days later, with my son on a Sunday when no one else was there, packed up my things and left. Apparently the news had spread slowly the following Monday, and last night several people told me the reaction had been very much like grief. Some people were angry. Some were sad. Some were confused. And they had nowhere to put those feelings because I had not said goodbye.

I did send the usual so-long-and-see-you-around-it's-been-swell email on my last official day of employment, and I did communicate with some people by phone and email in the days following. The writer I so enjoyed working with, the one with whom I won many awards, still calls me every day, so our relationship has not been interrupted. And already there is a new opportunity for us to work together, so she and I will continue. But for the others with whom I had worked so closely for so long, there was no neat ending. I did not realize until last night how much it mattered. I had always assumed you get laid off, you leave the building, and the water closes over your head. But last night my friends and former coworkers went around the room and told me, one by one, what I had meant to them, how much they had learned from me, the times they said I talked them off the ledge, the conversations about children and schools, the personal sharing we did that had nothing to do with work, and I was so moved by it all. The writer sat beside me and kept shushing me when I tried to answer what people were saying. "No," she said, "you don't get to respond. You just need to sit there and take this in." And, throat full, I did.

Afterward, they put me in a cab with all my gifts, too many for me to carry, and I called home and asked my husband to send our son down to meet my cab. When I arrived, he was there at the curb with two of his friends who were visiting. These three strapping young men reached in and gathered up the baskets of gifts and I walked into the apartment building in their midst, my arms blissfully free, and I thought how ridiculously blessed I am in all directions.

And now, just like that, a new era begins. I think this one will be, in part, about integration of my long-fractured self, about bringing hidden identities into the light, owning them, about learning to live inside the body I have for so long tried to disassociate from, the self I have harshly judged and found wanting my entire life. This new era will be about stepping into a room and saying this is who I am, this is all of me, my abundant body, my years in the soft contours of my face, the uneven features that have never pleased me, but which are the only ones I have, the turbulent inner life I couldn't help but reveal, but only and always under an alias. It's about walking into a room and not fearing the flicker that passes across another's face as they take in my girth—as if the other person is even thinking about me at all!

It's time—it's past time. I am coming home to myself. I am like a disembodied soul seeking reentry to the body that has waited patiently and faithfully all these years for me to love it, and love me.

Yesterday, in a stunning post she called "Sing Your Body, Vesuvius at Home explored a similar idea far more eloquently than I could ever express. Read it here.