Derek Walcott, who knows me by heart 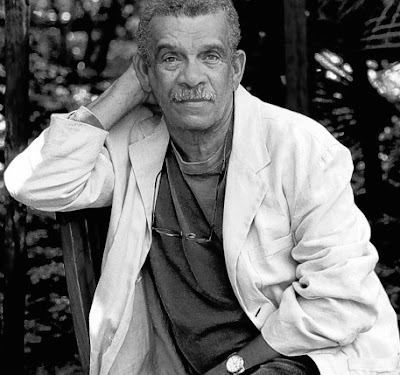 I just heard that Derek Walcott has died. When anyone asked me to name my favorite poet, his was the only name that came to mind. He was a Caribbean person, like me, a St. Lucian who became a Nobel Laureate, while living just down the road from the house where my mother spent her final years. He wasn't by any means a perfect human, but he inspired me. I saw the world I knew in his lines of verse, but it was the way he strung words together that mesmerized me. In 1962, he wrote:

I seek,
As climate seeks its style, to write
Verse crisp as sand, clear as sunlight,
Cold as the curled wave, ordinary
As a tumbler of island water

Because of him, I knew I could aspire to be a writer, despite being from a small place. I wrote my senior thesis in college about how his Caribbean identity informed his art, which over the course of his 87 years included not just his often operatic poems but also plays, essays, stories and watercolors. And throughout my life, whenever I have felt stuck on a piece of writing, it is his books I pull down from my shelf, as fuel, as instruction, as reason. Now, he has gone to wherever it is we go next, and he has left us holding such treasure. Here is one of his best known poems. It is also one of my favorites. I've posted it here before.

The time will come
when, with elation
you will greet yourself arriving
at your own door, in your own mirror
and each will smile at the other's welcome,

all your life, whom you ignored
for another, who knows you by heart.
Take down the love letters from the bookshelf,

the photographs, the desperate notes,
peel your own image from the mirror.
Sit. Feast on your life.