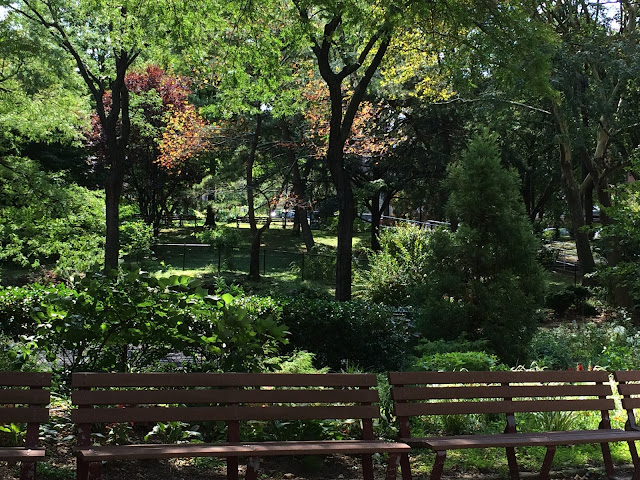 My husband was downstairs, sitting on a bench in the bright morning, waiting for a colleague from work who was coming by to visit with him. This woman is leaving the museum where they've both worked for years, he as an ichthyologist, she as a mammalogist. She's moving to England to take up a position with the natural history museum of Oxford University. She's German, and thrilled that, despite Brexit, she'll have more ready access to home. She travels today, and couldn't leave, she said, without saying, not goodbye, just see you later to my husband.

Before she arrived, our heart son E. came out of his building, which is opposite ours. He saw my husband sitting there with his hands crossed over the curve of his cane. E. came over and sat with him, and they struck  up a conversation in the bright morning.

Moments later, one of our complex's security guards walked up, a Jamaican man we laugh and share stories with all the time. He has jokes, this one. I like knowing he's out there, watching over my children as they come and go. Soon after that, my husband's work colleague arrived, and they all sat around talking in the bright morning.

They asked my man about all he has recently been through, and in his still hoarse whisper he told them, "Once I decided I wanted to live, then I knew I had to say yes to the operation, and that meant I was also saying yes to everything that came after, the pain of recovery, the slow road back, everything."

Our security guard friend cleared his throat. "Look, man," he said sternly, "no fooling around, now. You better get all the way better, because I never had a father, and I'm telling you now, you are a father figure to me."

"Me too," my husband's work buddy said.

My husband looked taken aback. He put a hand of over his heart and just nodded, humbled.

It was a moment I won't ever forget, shared by a little cluster of people sitting under the trees on a bright Sunday morning.