I remember when my children were little, and they were sick, my world got very small. Everything but their misery ceased to matter. I realize now what a luxury that was, that I could be relatively assured whatever ailed my babies, they would in all probability get well again, and the rest of the world would be allowed to reassert itself.

My world is small again, this time because the man I love has gone through a tremendous health ordeal, and his body is actively healing. My sister in law, a cardiologist, reminded me yesterday that recovery from open heart surgery is a squiggly line, not straight up. It helps to think of it that way, so I'm not too undone by the nurse practitioner telling us to come to hospital right away so she can do an EKG to check that my man's speeding heart is not in A-fib, which thankfully it was not, and so she sent us home again, with instructions to stop the medicine to raise his blood pressure and instead fill a prescription for a new medicine to lower his heart rate.

Today, it's about the number on the scale, which is somewhat higher than at the start of the week. It would be just a pesky detail for most of us, but for a cardiac patient it means a water pill gets added to the mix for five days and then we check in with the nurse practitioner again. She's feisty older Irish woman, and she scolded my man roundly for not taking his pain meds.

"We're not just giving out candy here," she said, exasperated. "We don't want you to be in pain because it stresses your body while you heal. That's why your heart is beating so dang fast. Trust me, you don't get any ribbons for having a hundred pain pills left at the end. Sheesh, you remind me of my father."

"I'll take that as a compliment," my husband said in his raspy whisper, his eyes dancing as they do.

NP O'Malley cocked an eyebrow at him, unable to hold in her smile.

"Well, yeah," she said grudgingly, "but it's a very thick compliment."

Those were some of the squiggles this week. On the up side, the physical therapist just left and while she was here she showed my husband how to propel himself up from the chair with less pain and greater efficiency, and how to get in and out of bed without putting undue stress on his sore heart and still knitting breast bone. "A Eureka moment," he said, beaming. It's so simple when you know the tricks.

So yes, my world has contracted, this time without the rock solid assurances I recall feeling in the past. In their place are prayers and purpose and hope and belief in the will of this man and the intelligence of his body as it heals and heals and heals. 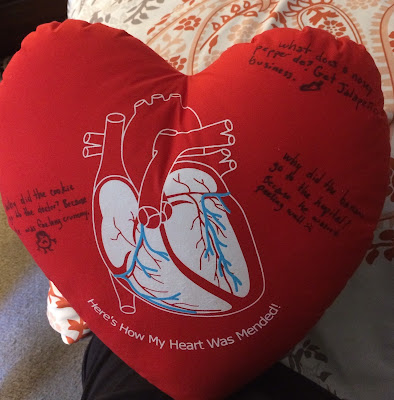 Our daughter wrote corny jokes on her dad's heart pillow, the one they gave him in the hospital to hold against his chest to cushion his incision when he coughs. One of the jokes in particular had our girl giggling all day. What does a nosy pepper do? Get jalapeño business. Man, that tickled her funny bone. "A whole internet of jokes and that's the one that grabbed you?" her boyfriend inquired, more amused by her than the joke. "But it's funny!" she insisted, and was off giggling again. From his hospital bed, sick as he still was that day, her dad smiled at his delightfully silly girl.
Posted by 37paddington at 3:56 PM