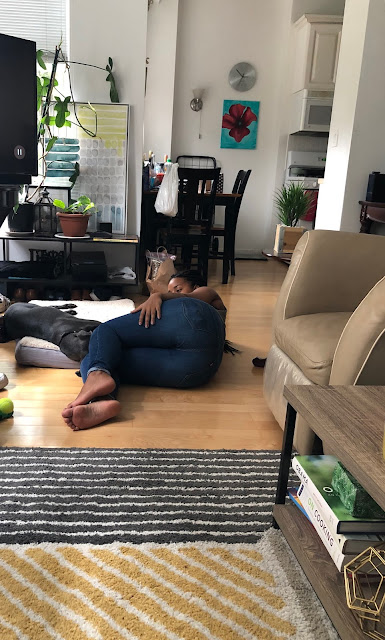 My daughter and her boyfriend got so attached to Jersey, but the more attached they got, they more they wanted her to be happily settled in her forever home. The hardest part was taking her to the required adoption fairs each weekend, Saturday and Sunday, and having her be passed over by people who wanted cute puppies, and small apartment-sized dogs. Jersey is five years old; she's big and active; and sometimes that's all people saw. They didn't pause long enough to see what a sweet old soul she is. But my daughter posted diligently on the foster agency website, photos of Jersey that showed her in an infinitely better light than the "dusty" photos of her that were there before ("dusty" was my daughter's word. Actually what she said was, "They really aren't doing Jersey any favors with these dusty ass photos"). And a woman from Long Island finally saw her. I think my daughter also played some heartstrings with her most recent post, which was captioned: "Jersey's excitement for this weekend's adoption fair? 💯" 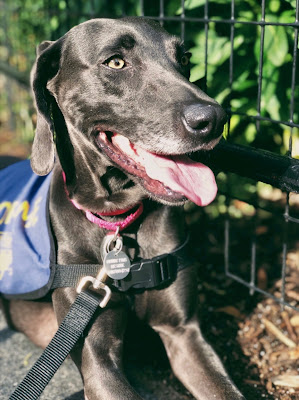 The whole adoption saga tugged at my heartstrings anyway. The woman who took Jersey home with her lives in a house with a yard. Apparently Weimaraners are hunting dogs and need to be able to stretch out and run. The woman is also retiring soon so, as my daughter put it, "She'll be home in the days giving Jersey all the love she needs." She gave them her card and invited them to come visit Jersey Girl any time. They were sad to say goodbye to their housemate of two weeks, but over the moon that she had found a good home.

And now they're already looking to make magic again. They pick up a new dog this Friday. This one is apparently a shy little guy who's been working with a trainer to help him be less skittish. They are asking his fosters to not indulge the dog's fears, including of the outdoors. My daughter is actually really balanced in that way. She's never mean but can be firm, because she believes dogs need outdoor running time. She's not a pushover, but her boyfriend, good luck with that.

Look at me. Getting all engaged with these dogs when I never gave in to my children's pleas to get them a dog when they were small. I grew up in Jamaica, with dogs and a yard where they could run and play. I didn't love the idea of confining them to a small apartment in the city, at the mercy of their humans' work schedules and whims. Nor did I love the idea of picking up poop. But of course, my girl grew up in the city, and this is the reality of being a dog lover in the city. I find I'm actually kind of loving this whole fostering adventure, too. I enjoy playing with and getting to know the dogs and hearing about their journey, while shouldering none of the responsibility. I guess you could consider me my daughter's supportive animal.
Posted by 37paddington at 2:20 PM