There've been so many things I've wanted to share, or to set down for my own record, but I've had houseguests every weekend this month, and sometimes into the week, and in addition to that I am a little underwater work wise, as I picked up a side gig editing for my old magazine, which has turned out to be more time consuming that I'd wagered, and of course, I have to get the book done, too. I'm working on it every free minute. Mostly, I give my guests a key and send them off into the city for various entertainments, and while they're gone I sit and my desk and work intently, I almost said furiously, but I'm not at all furious. I love this work, even though right now it feels really hard.

Here's one thing that went down:

My cousin and her son came in from Virginia last weekend, and they will be here again this coming one, along with my cousin's husband. Last weekend, they came to visit with the family of one of her high school friends from Jamaica, who this week will settle her daughter into college at Vasser. Since my cousin and I went to same high school, I remembered her friend well. I was older and a school prefect, a "big girl" to them. The friend and her husband starting "dating" one another when he was eleven and she was twelve. Their relationship lasted through his college stint in Miami and MBA degree and her medical school training and residencies in England. They are the loveliest, most blasé couple, so deeply comfortable with one another, and clearly still very much in love. With them was their son, who works in his's dad's business in Jamaica while pursuing his law degree, and his girlfriend, a Chinese Jamaican whose nationality confuses everyone at her college in upstate New York. And of course, the newly minted college freshman, who puts a shy light in my nephew's eyes. She's cute as could be, a dancer, who might be joining us for Thanksgiving this year. The invitation was extended. In any case, our apartment was home away from their hotel for the family visiting from Jamaica this week, and their company was delightful. 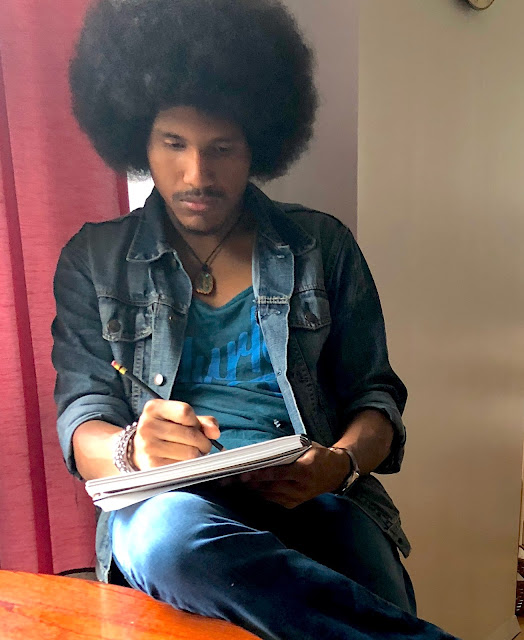 My nephew, a Jamaican American Assiniboine Sioux and an artist to his core, is very aware of his dual black and native heritage these days. While in New York, he saw the Spike Lee movie BlackkKlansman and was blown away, especially by the ending, which he thought drove home the point that everything that came before was not fiction. As we were discussing the movie, he told me about his family's visit to Toronto the week before. It was him, his parents, his brother, and his cousin, who grew up with them and has a Spanish last name. The rest of the family has an obviously Native American name. The two older boys are seniors in college at 23 and 22, and the youngest is a college freshman at 18. Driving back from Toronto, they decided to stop at Niagara Falls. They toured the Canadian side first, and then decided to see what the Falls looked like from the American side. My cousin didn't go with them. She decided to relax and window shop by herself on the Canadian side. The rest of them walked across a white line into a cage like customs area, and suddenly the border agents became snarly and rude, whereas the agents on the Canadian side had been warm and joking.

They showed their passports, and the official looked them over—my cousin in law who is Indian from Montana, but could also look Mexican, his sons with their curly Afros out to here, and my other nephew, Aunt Winnie's grandson with the Spanish last name. The customs official surveyed them all with narrowed eyes and then zeroed in on the Spanish last name. He asked my nephew his first name. "Joseph," he said. "Do you mean Jose?" the customs guy scowled. "No, Joseph," my nephew repeated. For a few minutes, it looked as if he was going to refuse these four American citizens entry into the land of their birth, but then he slammed the passports closed, shoved them at my cousin in law, and waved them on.

My nephew, the one who was relating all this, said that was the moment when he realized that the whole time he'd been in Canada, he'd felt carefree, and hadn't questioned his welcome anywhere. But now, a few steps into America, the vigilance was back, the constant bracing for the possibility of something unpleasant going down. His dad was aware of it, too. "Do you feel a kind of weight pressing down on you, being here?" he asked the boys. They all nodded. "Let's go back and find your mom," he suggested. And so they did. And as soon as they crossed the painted white line out of America, the weight lifted, the sense of freedom returned, and my nephew knew for sure then, that he hadn't been imagining the way things were.

That's my nephew in the photo here, a musician with a distinctly seventies vibe, sketching in my living room. This child is no threat to anyone. You'd be hard pressed to find a sweeter, more heartfelt soul.