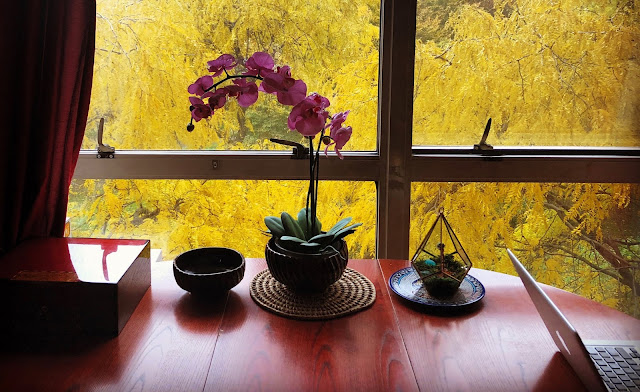 I'm working at my dining table, next to my expansive window, outside of which the trees have turned to spun gold. Earlier, before I moved with my laptop from the desk in my bedroom, a moth flew in through my window, it's wings were gold glitter, so shimmery I thought at first it was a butterfly. I tried to shoo it back out the open window, but it dodged me and flew under my bed. I decided it was a blessing.

The TV is set to the news, turned down low, a hum in the background. Every so often something jumps out: The reporter saying that 45 viewed that slaughter in Pittsburgh's Tree of Life synagogue as "inconvenient," a distraction from the story of the caravan "invasion." They're talking now about his plan to send 5,000 troops to the border, and to open fire on the migrants if someone throws a stone, which I take to mean that someone will surely be planted in the crowd to throw a stone. Of course, this caravan of asylum seekers will not arrive at our border for two months yet. Imagine, if instead of troops, we were the kind of nation that would send lawyers, social workers, doctors and teachers to the border, to help those whose desperation has led them there. But the election is next week, and so 45 is trying to whip his base into a frenzy of xenophobic fear and outrage, and we saw the sorrow that brought to Pittsburgh a week ago.

And yet. All this gold in my morning, like a whisper of something good in the world, telling me my efforts, small as they might seem, are not in vain. Do what you do, it whispers. We all have a part to play in turning this national nightmare to spun gold.
Posted by 37paddington at 1:03 PM