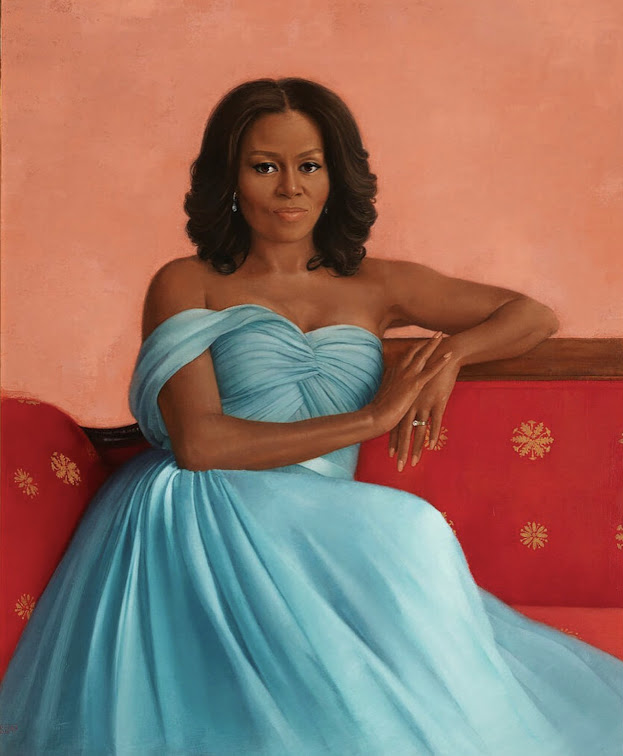 The Obamas returned to the White House this week for the unveiling of their official portraits, an event that should have happened under the previous administration but of course, that president was too craven and pinched to have hosted such an event, and a good thing too, because how much more beautiful it was to see my forever President and First Lady celebrated by fellow stellar humans such as former Obama VP and now current President Joe Biden and his gracious First Lady Jill Biden. I thought Michelle's portrait was just stunning, capturing her elegance, grace, and class, and the colors are absolutely sumptuous, the contrasting red and blue and coral pink setting off the brown of her skin gorgeously. 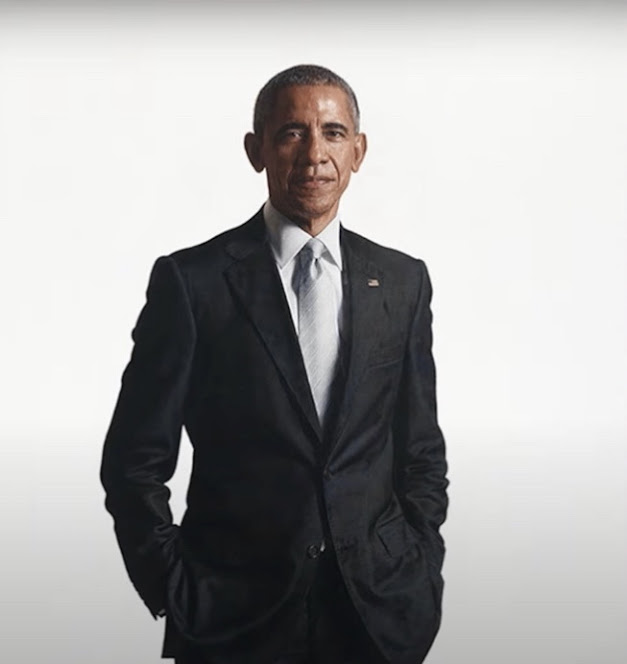 I didn't swoon in quite the same way at Barack's portrait. I was confused at first, thinking it was a photograph, but no doubt this was the kind of hyper realism he wanted, straightforward, no frills, the man himself and nothing else. The painting does capture his likeness, especially the lively intelligence and wit always right there behind his eyes. The former President was his usual captivating self at the podium, and the usual joshing camaraderie between Joe and himself was cheerfully in evidence, reminding us all of how collegial politics can sometimes be. 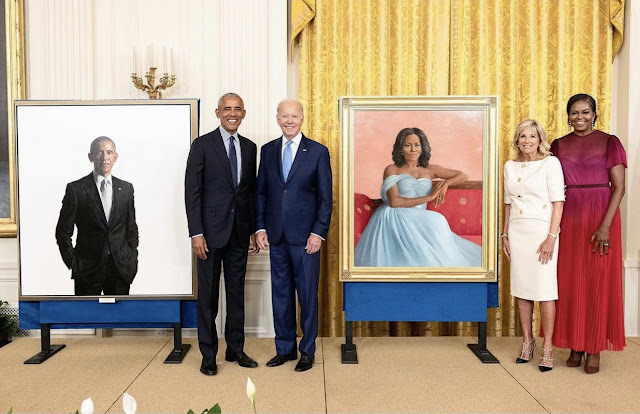 I particularly loved the words Michelle spoke to mark the occasion. “For me, this day is not just about what has happened,” she said when it was her turn at the podium. “It’s also about what could happen because a girl like me, she was never supposed to be up there next to Jacqueline Kennedy and Dolley Madison. She was never supposed to live in this house. And she definitely wasn’t supposed to serve as first lady. But what we’re looking at today—a portrait of a biracial kid with an unusual name and the daughter of a water pump operator and a stay-at-home mom—what we are seeing is a reminder that there’s a place for everyone in this country. Because as Barack said, if the two of us can end up on the walls of the most famous address in the world, then it is so important for every young kid who is doubting themselves to believe that they can, too.” 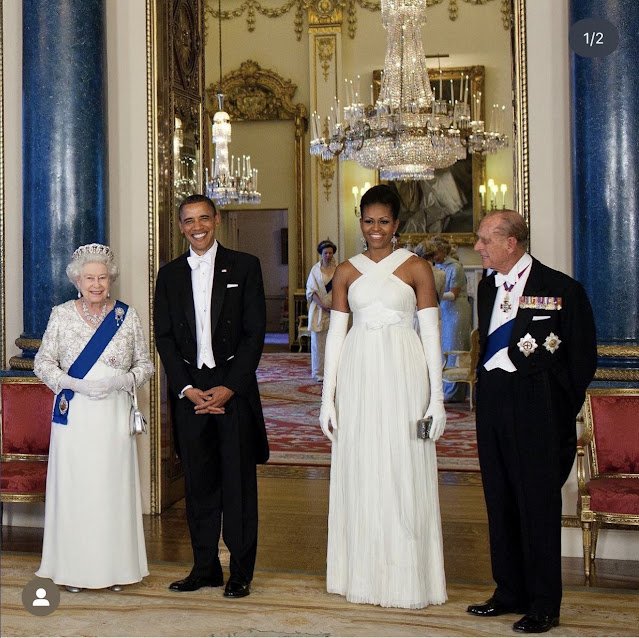 The very next day, on June 8, these photographs of the Obamas with Queen Elizabeth II and Prince Phillip were everywhere, because on that afternoon, the reigning British monarch breathed her last and her son Charles became King. For me, these photographs reveal the best in us, and though many people are rightly pointing out that Queen Elizabeth reigned over an institution responsible for building wealth by plundering colonies of their natural resources for centuries, as well as establishing the new world evil of slavery rooted in violent racial subjugation, even so, one can hold that damning truth and still admire this Queen's seventy years of fortitude and gloved power, and the way she proved the boys wrong in their estimation that she, a soft girl, was not up to the task of ruling. I don't agree with all her choices, not at all. In fact, I think she was woefully misguided in many respects, particularly in not allowing family members to love who they chose, with all tragedies that resulted, but I do think she did the best she knew how, and if she'd understood the dire need to address and redress the ills committed through centuries in the name of the Crown, well, I suppose she'd have done so. One can only hope that King Charles will have divined the portents, and be inclined to begin the healing. The cynic in me doubts it but would love to be proved wrong. 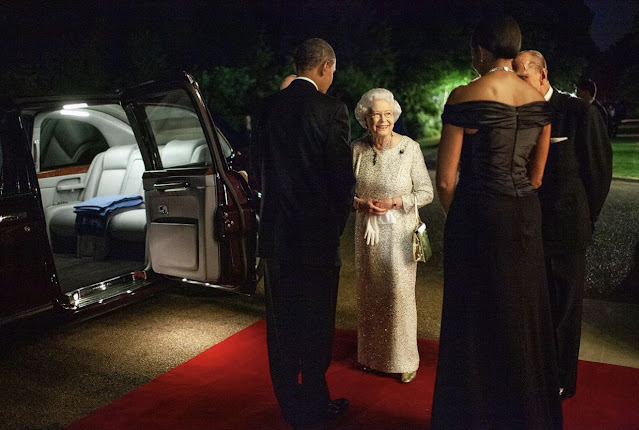 I was actually in the presence of Queen Elizabeth in my lifetime. She knighted my father in 1987 for his work as Chief Justice of the Organization of Eastern Caribbean States Judiciary. I was right there next to my mother and brother inside the great room at Buckingham Palace as she laid the sword on my father's shoulder and said “I dub thee.” Afterward, they exchanged a few words, shared a laugh. My brother and I walked out of that room in the company of parents transformed by old world colonial convention into a Knight and a Lady, though my mother's sisters all remarked that truly, my mother had always been a lady, and it didn't take the Queen of England to tell them so. This week a monarch who is part of our family’s history took her leave of this earth. She had a remarkable run by any measure. Now at last she can rest. 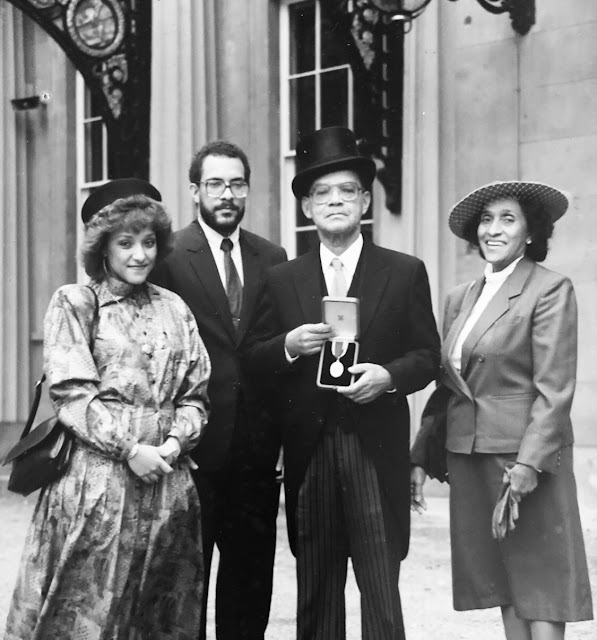