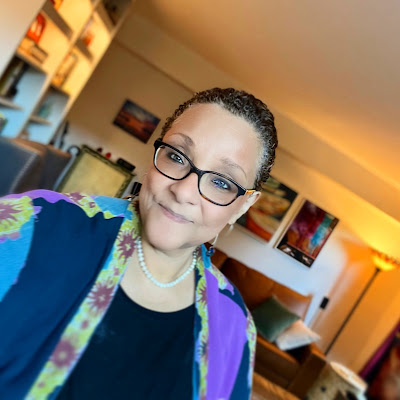 Happened into some good light last Thursday, right after getting my hair trimmed and in the wake of applying makeup to go meet a friend for dinner. And so I took a picture. Would have been better with lipstick, but I like the picture fine, even though I don't look half that bright and shiny in real life, which may be why I like the picture. I was trying out new makeup because being on the other side of my recent work deadlines, I now have endless hours in the day to obsess about The Wedding. My son's wedding in two weeks! This is really happening.

I wont waste too many words on my anxieties about showing up, seeing all the people I haven't seen in a while, how I will look in the pictures, the whole nine. It makes no sense, really. No one cares how I look but me, no one is judging but me. When in my life did I get so hijacked by the notion that I appear wrong in every way. Just kidding. I know when it happened. I was four years old and had just been enrolled in a new school, the back gate for which was just a few doors up from 22 Studdridge Street in London, where we lived that year. Let's just say the kids in my class did not welcome in the new girl from Jamaica with the funny accent. I remember everything with cinematic clarity from that time. I swear I'm still living my life as if everything that happened back then is the whole truth about me, and years of therapy have not touched this. We humans can be so screwed up. Because why isn't knowing exactly where the misunderstandings began not enough to cure them? Oh well. This is a boring story.

My cousin, the mother of my nephew whose band played so beautifully at Kennedy Center on Friday evening, is now in bed with Covid. She had 35 people in her house the night after the concert, many having flown up from Jamaica or trained it down from New York. Most were staying over at her house, too. On Friday morning she walked six miles with our cousin Andrew and on Saturday morning she was so exhausted she could barely make it across her bedroom. She closed the door, climbed into bed, and prayed that no one else would come down with symptoms. So far, no one has. So much for thinking those of us who haven't yet caught the virus might be immune.

I was going to join a new choir this Wednesday, one closer to home, which holds rehearsals in the afternoon rather than the evening. But now I think I better just keep myself quiet for the next two weeks, and see as few people as possible to minimize the chance of getting sick before the wedding. Because I will not miss seeing my son marry his love. Right now, nothing matters more. It helps that I’ll take any excuse to just stay home. It was no hardship at all for me when the country went into lock down in the first year of the pandemic.

My cousin from Trinidad, who is herself recently recovered from Covid, arrives on Wednesday and will be with us for three weeks, till a few days after the wedding. I had all kinds of plans for us, was looking forward to doing the city with her given that I'm blissfully between assignments, and I also wanted to get myself some bold red frames to wear with my blue-gray mother of the groom outfit, to lift the look somewhat, as the color is very understated. I'll try to punch things up with accessories, but again, no one will be looking at me, not with that gorgeous, glowing bride and her handsome bald-headed groom. Two weeks! My boy is getting married y'all!