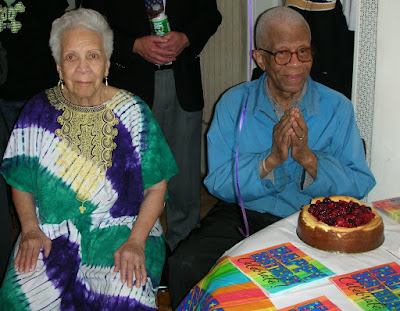 Today is Uncle Charlie's birthday. One year ago, the cousins brought cake and balloons and pretty birthday plates and napkins to his home to celebrate his 92nd birthday. He was still walking to the corner to get his paper every morning, and sitting in the lobby with his friends from the apartment building every afternoon, waiting for the mail. But two months after that, he had a heart attack and the home attendant called 911. The EMS came, they rushed him to the hospital, and two days later, a resident called me (as his health proxy) to say he had tumors all through his lungs and liver, and did the family want him to be treated? My uncle didn't want treatment. He just wanted to come home. Three weeks later, he did, and he never really got out of bed after that.

By July, we brought in a hospital bed and at-home hospice care was put in place. The hospice nurse ordered oxygen and morphine by August. Family members and friends came by and sat with my uncle for hours at a time. He always raised a hand in gratitude, and made the sign of the cross to thank us. He could barely speak. Everyday, my mom read to him from the Bible. At night, my aunt would shuffle down the dark hallway to make sure he was still breathing (my aunt and uncle have had separate rooms for decades), and we worried she might fall. They didn't have nighttime home care then, just their daughter who was troubled and more often than not didn't come home.

The family had planned a big September gathering for my aunt's 90th birthday, and now we feared my uncle wouldn't be there to celebrate it. My son and daughter sat with him sometimes. There was the night in late August when his breathing was so shallow we thought he would die. My mother and my husband, blessed souls both, stood on either side of him, silently praying. I told my children to go in and tell him goodbye. They kissed his forehead and held his hand. This was the man who had baby sat them when they were little, falling asleep in front of the cartoons so that they could make popcorn and jump on the beds and generally wreak joyful havoc. This was the man who drove my son to school for two years before he could take the bus on his own. This was the man who would always reach into a drawer or coat pocket to pull out a gift for them, candy, a small clock, a delicate figurine. Their eyes filled with tears. But Uncle Charlie held on.

Family members flew in from Florida and Vancouver, drove across the bridge from New Jersey, took the train up from Virginia. On September 7, the party went off as planned, with balloons and little cousins darting between the legs of grown-ups, playing children's games with no sense of life declining in the furthest bedroom. A few at a time would go in and sit with my uncle, chatting softly with one another, stroking his hair, holding water to his lips, covering his hands with our own. It was strangely peaceful in there. All the days until the day he passed on September 19, 2008, his room was the most serene place in the house, and you couldn't help feeling he had lived a good life, he had been generous to his family, and now he had made his peace.

Happy Birthday, Uncle Charlie. I hope you're loving it where you are.
Posted by 37paddington at 11:18 AM