We are just back from Antigua, where we buried my husband's Mom on Friday, June 26, 2009. My husband did the flowers for the church, drawing on what he had learned from his mom, whom he accompanied to flower arranging classes back when he was a teenager. He only went because he was interested in a girl in the class. He ended up learning a lot about flowers, and the night before his mother's funeral, in honor of her, he created two large anthurium pedestal arrangements for the front of the church. They were majestic.

Dad, aka Grandpa Shadow, was present for the entire proceeding, several hours from the viewing to the service to the burial, despite his having suffered a debilitating stroke two decades ago. He is paralyzed on on side, one hand curled against his body, and he walks with a cane, dragging the lame leg along. And yet he climbed all the stairs to the Cathedral, and then walked with the rest of us down a long winding, gravelly path to the gravesite, and stood stoically as Mom was lowered to her final rest. He sobbed only once, earlier in the church when he opened the program and saw staring back at him a photograph of himself and Mom, their heads resting against one another after their 50th anniversary celebration last year.

For the service, the Cathedral was filled with mourners. Even the Prime Minister of Antigua was there. My son, daughter and I walked in with Dad and took our seats early. My son, named after his father and his grandfather, was at his namesake's side the whole time, making sure his grandfather didn't fall, catching him when he stumbled. I was so proud of him and his sister, their gentleness with their Grandpa, the constancy of their attention.

My husband and his brother and sister, and all Mom's sisters and brothers, walked in behind the flower-draped coffin. My husband introduced the tributes, his eyes swimming with tears but his voice never breaking. But when he went up to read the lesson, in that moment he couldn't see the words on the page. As he turned the gilt-edged Bible pages, searching for the Book of Lamentations, his brother went up to help him. And yet his voice as he read the lesson remained steady.

My eldest niece, a recent college grad, read a letter to her grandmother, whom she called her "Queen in Shining Armor." She cried as she read, her mother at her side, and it was beautiful. My husband's brother read a tribute called "Our Mother's Greatest Gift to Us," which he said was her faith. It was a lovely piece of writing, but the most wrenching moment was at the end, when he revealed the great gift after considering all her other gifts, and his voice caught, and the tears overflowed.

Sunday morning was the reading of the will, everyone gathered in the living room, the breeze blowing in off the gallery, soothing us. Everyone mentioned in the will was present, including Mom's five grandchildren. My husband, as executor, read the single typed page, then we all left him and his two sibling to discuss how her wishes would be carried out and how their father would be cared for. My sister-in-law said later that their mother "didn't put a single word wrong," that everything she wrote in her will was "right and perfect."

The rest of the day, we all pitched in to help my sister-in-law and her three girls move from one house to another. The first was the house my nieces mostly grew up in, so this was an ending of another sort. The second house is smaller and in a more remote part of the island, a brand new construction with a pool set into a wooden deck at the front.

The new house had quirks. The central air wouldn't get cool. The electrical wiring was counter intuitive. You couldn't, for example, turn on the lights in two of the bedrooms unless the nearest bathroom light was on. There were no mosquito screens on the windows. And yet, the setting was peaceful and lovely.

There was a pond across the way, and the twilight sank into it with an array of golds and pinks. We stood out on the deck talking until the night turned black and a million tiny stars studded the sky. All of us, adults and teenagers (no children anymore), were just happy to be with one another, even to mark such a loss. Mom gathered her loved ones together this week. And she strengthened us. 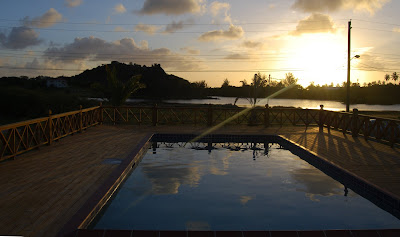