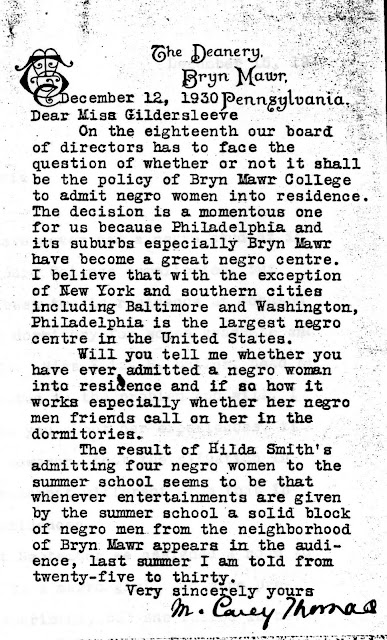 This letter, which I found posted on Barnard's website, is a revealing artifact of a past era. It was sent to the all-women's college by a residence official at Bryn Mawr shortly after Barnard admitted its first Negro student, the incomparable Zora Neale Hurston. According to the college's records, Ms Hurston lived off campus, thereby preventing the unwelcome situation of "negro men from the neighborhood" appearing at campus "entertainments." How very different the school was when I was a student there--living in the residence halls--a short 35 years later.

Next week on tax day, when the Tea Party fringe elements start yelling ugly slogans at their planned protests, I'll think of this utterly fascinating epistolary artifact and remember that progress is not only possible, but inevitable.
Posted by 37paddington at 6:33 PM