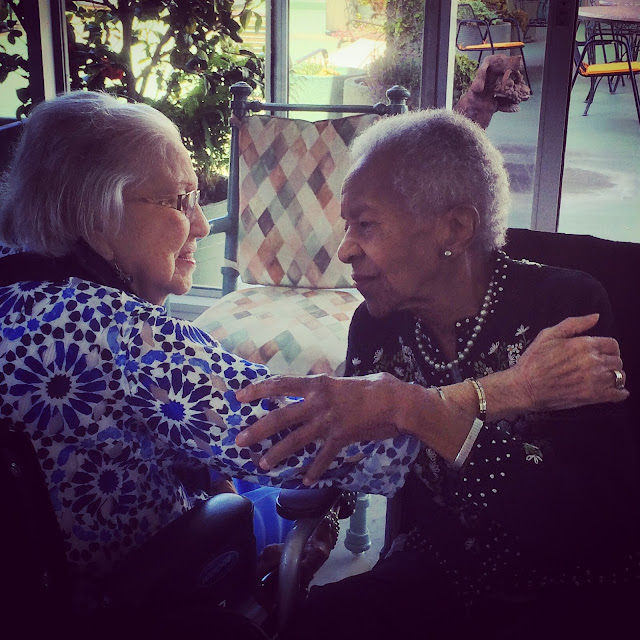 The book party/ 98th birthday celebration was fantastic. Ellamae was in her element, with well over one hundred guests celebrating her and her book. Her niece and grandniece and four stepdaughters came from DC, Denver, Columbus, New York and Chicago, and her godchildren were all there, too. So were former colleagues at Kaiser, and former patients, and a cohort of women doctors whom she mentored. All her friends from the retirement residence and the Bay Area also showed up. It was clear that Ellamae is so very loved, and she basked in it.

Even when she was exhausted towards the end of the festivities, she still refused to be taken downstairs to her apartment. She had signed every book, almost 200 of them, beforehand, and at the end of the afternoon, they were all gone. Some she signed with her first name only, some with her full name, some with her initials circled, and a couple she signed with her former married name, as if her first husband was whispering to her. She didn't seem to realize she'd signed that name, and her niece and I just looked at each other and let it pass. At 98 years, she can sign whatever name she wants.

A photographer took pictures, which I will soon have a link to, so maybe I'll share some here. In the meantime, here is one of my favorites of the afternoon, when Ellamae and an old friend greeted each other. They put their hands on each other's cheek and just stared with so much love into each other's eyes. All through the party, whenever I came near, Ellamae would reach out and take my hands in hers and kiss them, then press them to her cheeks. I think she was happy with how our work together turned out. I also think I caught her at the right moment, when she could still tell me her stories. Ellamae isn't using her words much anymore, but her eyes speak her heart.

There is so much more I could report, but I seem to have come down with something buggy on the plane ride home. My eyes won't stop streaming and I've been in bed all day, mostly sleeping and reading when my aching head allows. My son leaves for a three-week jaunt with a friend around Scandinavia and Europe tomorrow, so I'll pull myself together and go for the ride to drop him at the airport. Oh, to be young and footloose, with a sense of adventure calling you. In other news, his firefighter/paramedic dreams are a few steps closer to coming true.
Posted by 37paddington at 10:03 PM