In our little apartment last night there was the man and me, my son and his girlfriend, and my daughter and her boyfriend. The six of us watched action flicks with names like Olympus Has Fallen and London Has Fallen. Cheesey stuff, but they starred my former crush, Gerard Butler, of Phantom of the Opera fame. I'm over him now, but my family still teases me about the time I swooned. My kids said, "Sorry Dad, you might need to leave the room."

If you saw Gerard in Dear Frankie or the excellent BBC miniseries The Jury, you might have some insight into why I was watching cities being blown to smithereens on TV last night, while old Gerard saved the day.

This afternoon, my son and his girlfriend flew to Orlando. Someone my son used to work with offered them the use of his time share for a few days.

Meanwhile my daughter just left to meet some of her lifer friends, because they're having a going away party for one of their own in Brooklyn tonight, after which her friend will return to Oberlin, from which she has just graduated, and take up a job as a curatorial assistant at a very fine art museum. It's a job she couldn't get in New York City, but when she returns at the end of a year, she will have this fine qualification under her belt, and she'll be set. My daughter's young man will find his own way to the party after work. My daughter is slowly introducing him to her New York life. I wonder what he'll think of Brooklyn's hipsterland?

As for me, my darling husband and I will be meeting with the other members of the cookbook committee from church, at an Ethiopian restaurant in Harlem. We will be discussing cookbook templates and self-publishing strategies, which is why they let me, who they seldom see in the pews on Sunday, onto their committee.

One of my former English professors from college, a Quaker who is now is her 80s, is also on the committee. Her husband, a former sea captain, recently died. He and my husband were cohorts. Both were always in church on Sundays, and active on committees, while their wives would see each other only when we showed up to support our men at fundraising events. I adore this woman. Her repartee is witty and razor sharp. And twinkling eyes is not a cliche when applied to her.

It's almost midnight. My husband is snoring softly and my daughter and her bf are in the living room laughing over Zootopia. He got lost in Brooklyn tonight, which makes him more a New Yorker today than he was yesterday. Did I mention he's from upstate and is moving to the city for grad school? He's also working in the city this summer, and learning its labyrinths. Getting lost on the subways is definitely a rite of passage. Once you find your way home from that, you'll have your markers, and you'll never be lost again.

Dinner with the cookbook committee was vegetarian and delicious—red lentils and chick pea stew and cabbage and collards, all eaten by hand with injera, a spongy sourdough flatbed that replaces utensils in Eithiopian cuisine. I always love seeing my husband with the church women. They adore him and he adores them. He was his usual charming and lovely self with them, while playing footsies under the table like a teenager with me! 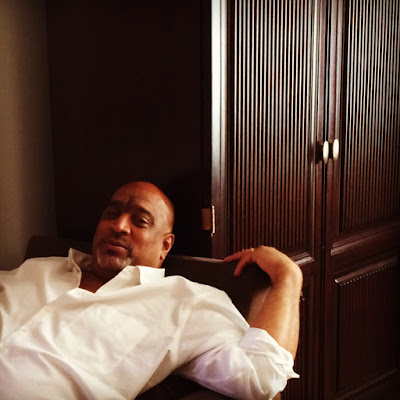