Morning in the city 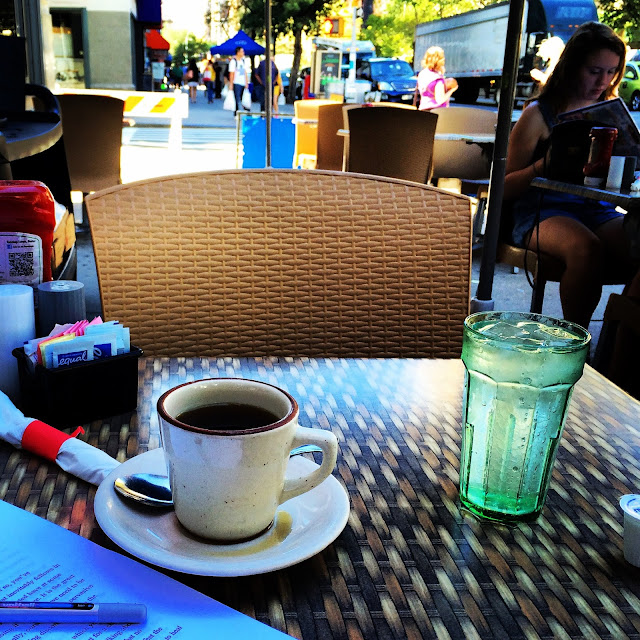 Good morning. Thanks for the wisdom and support yesterday. The day got immeasurably better as the sun came up and melted the brooding thoughts. Still, as someone observed in comments, it's very different living with your grown children after they've lived away than it is living with them as they're growing up. It's a more complicated dance, as I discover every day. But with rents in New York City so crazy high, our kids returning from college have all moved back in with their parents. Our situation is not unique. I think the college grads chafe at this arrangement at first, because they've had four years of pseudo independence, and now, if they want true independence they have to create it from scratch. In this economy, it takes a minute.

Three years after graduating college, my son's goal of becoming a firefighter/medic is finally coming to be. He's worked two jobs simultaneously while pursuing this goal, which is not an easy one to achieve. He will continue to  coach track and field at a high school in the city, but he gave notice at his corporate job two weeks ago. His last day was yesterday. He was set to move out on his own on June 1. He and one of his former college housemates had been approved for a nicely renovated two-bedroom in East Harlem, a gentrifying part of town. But then the whole FDNY process suddenly starting moving fast, and he realized he'd need to quit his main job. He decided to wait until he could see the new shape of things financially before committing himself to steep New York City rents. Living at home chafes him far less than it chafes my daughter. My particular theory on that is he is better at backing his mother off when she becomes too intrusive in his affairs. He also hates living alone while my daughter relishes it.

I avoided this post-grad transitional dance by moving to another country for college and going straight to graduate school after it. And rents were more affordable then. I rented my first apartment, a one-bedroom in Morningside Heights, for just $325. The apartment my son almost moved into with his friend would have cost him $1200 a month just for his half of the rent—$2400 overall. And grad school's not a given anymore. Unless you're sure of what you want to pursue it's a prohibitively expensive path. Yesterday I listened to my daughter and one of her friends, and my son's girlfriend talking about how hard it is to find your footing in the city, and how so many people end up in jobs that have nothing to do with what they studied, just to pay the bills. It was really a conversation about preserving your dreams, and pursuing them, and figuring out when and how much you bow to pragmatism.

My heart goes out to these kids. I think I had it much easier. But I do believe if we can get past the wanting everything all at once (guilty as charged) we can create lives that are personally meaningful. It's happening now for my son. It will also happen for my girl. I keep reminding her that she graduated not even two weeks ago. So breathe. She and I agreed last night that it's time for another purge, a massive throwing out and giving away of things. Still, as much as I complain about being overrun by things, I'm happy my children have a place they can come home to, a net under them as the plan the next stage.
Posted by 37paddington at 9:31 AM