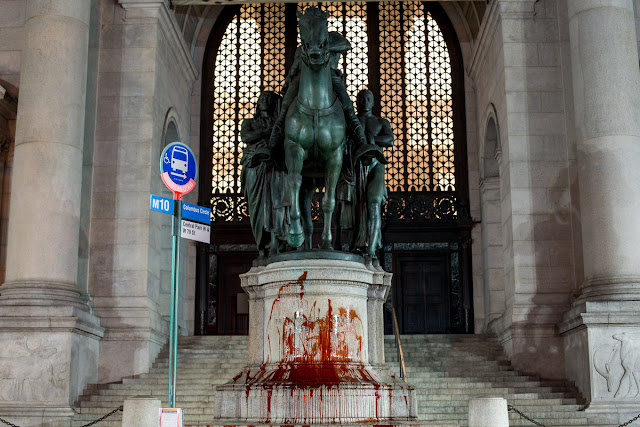 At the front entrance to the American Museum of Natural History in New York City sits a statue of Teddy Roosevelt astride a horse, with an African American man walking on one side of him and an Indigenous man on the other. The rider is in full military uniform while the men on either side of him are partially unclothed. A little more than a week ago, someone spattered red paint at the base of the statue, which has long been criticized as "a condescending expression of a power relation."

A group called Decolonize This Place released a fascinating statement in the aftermath. "Now the statue is bleeding," the group stated. "We did not make it bleed. It is bloody at its very foundation. This is not an act of vandalism. It is a work of public art and an act of applied art criticism. We have no intent to damage a mere statue. The true damage lies with patriarchy, white supremacy, and settler-colonialism embodied by the statue." 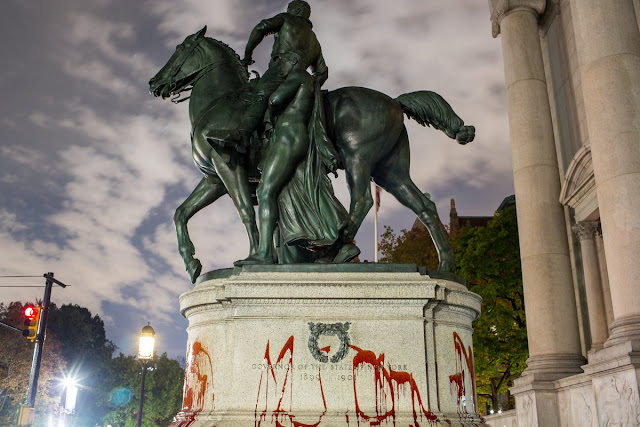 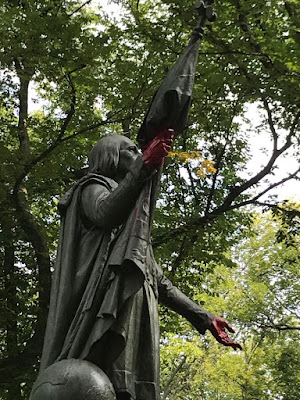 In other recent acts of protest, red paint was daubed on the hands of the Christopher Columbus statue in Central Park, and the word "racist" was scrawled across the base of the statue of a doctor, J. Marion Sims, who conducted gynecological experiments on enslaved women without anesthesia.

The mayor has appointed a panel of artists, historians, preservationists and activists to come up with a plan for monuments that represent a history of subjugation and hate. New Yorkers were also asked to share their opinions in an online survey. The paint of Teddy Roosevelt has since been removed, and the hands of Christopher Columbus have been washed clean. Most locals, when asked how they felt about the red paint protest, were not fans of the action. "I didn't even know what this statue was, to be honest," one man told a Gothamist reporter. "I've walked by it a dozen times. Now I can see why that's offensive for some people, but I think there are better ways to protest a statue than chucking red paint all over it, right?"

So what do you think: Reprehensible act of vandalism or socially constructive art criticism? Something else entirely?

Out of respect for the journalists at Gothamist who reported on these events, and whose workplace was shuttered overnight by a billionaire owner disgruntled that they'd voted a week ago to unionize, I'd love to hear any and all thoughts on the red paint activism and/or the historical monuments issue. 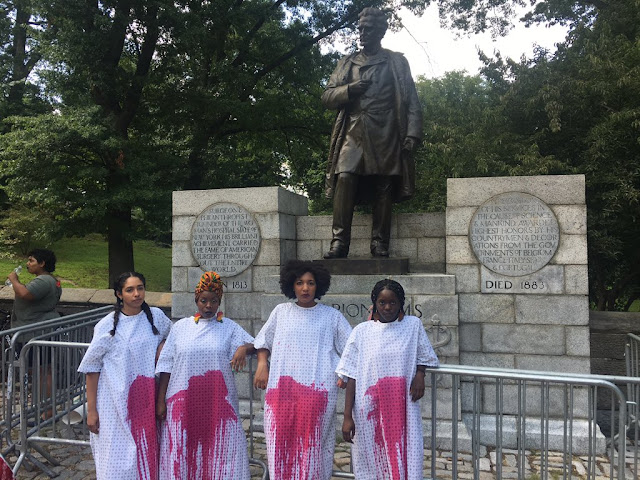