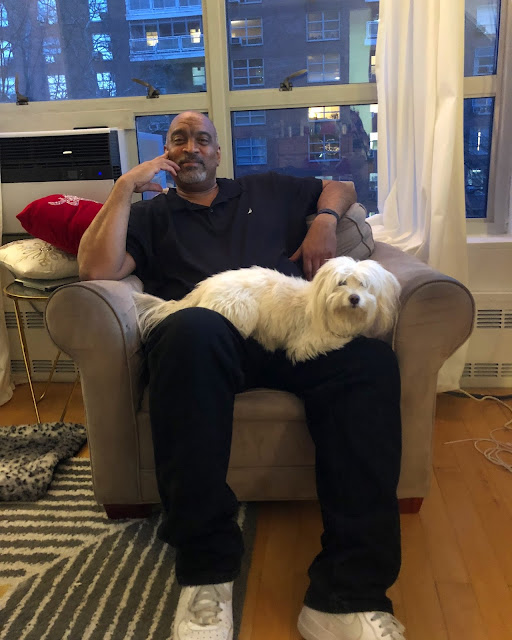 Our daughter takes care of that little dog when her owner is traveling, which happens quite regularly. We've all fallen in love with little Nina, who spent Christmas last with us. On Saturday, while I was in Oakland, my daughter and her boyfriend had her dad over for dinner. Our girl deposited Nina on her dad's lap, and then took the picture. My camera-resistant husband was fondly obliging. Only his daughter could have captured this photo, and I love it.

My daughter, here holding Nina, was having a birthday party at a trendy club in Soho (she will turn 24 tomorrow). Before the party, in addition to her dad, she invited her sibs (brother and cousin) and their loves, as well as a couple of other friends over for dinner and to pre-game—which basically means they do drinks before they go out, because drinks in New York clubs are hella expensive, and shallow pocketed twenty somethings try to nurse one, at most two, for the night. Here's the pre-game crew, complete with my husband. If I hadn't been out of town, I wonder if he would have gotten in on the pre-clubbing action? The kids would probably have left us old fogies to keep each other company across the way. As it was, my man had a happening evening without me, though they did try to soften my FOMO* by sending me these pictures. 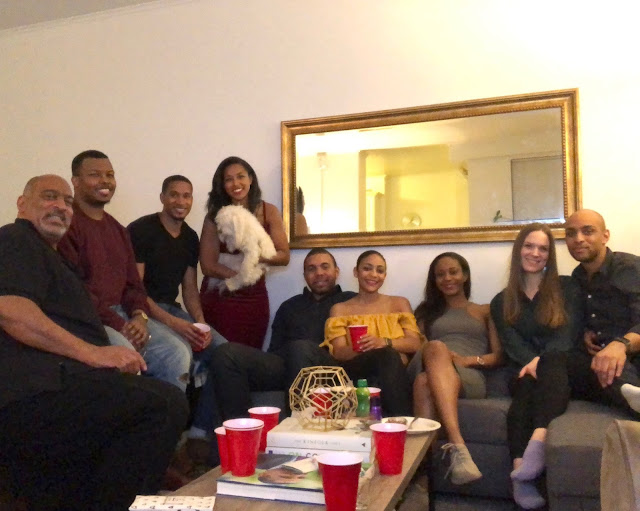 *FOMO = fear of missing out