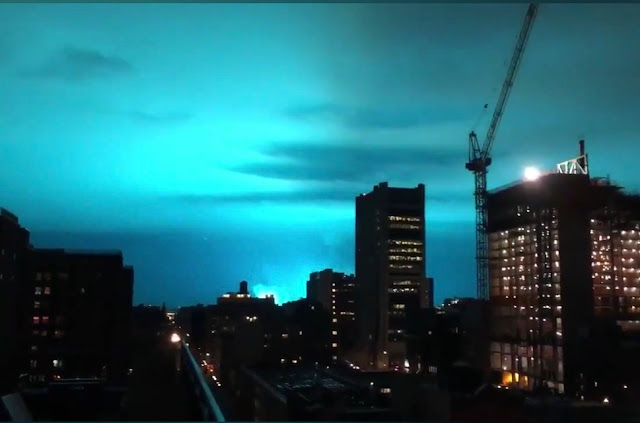 Last night, at just past nine, the sky over New York City suddenly bloomed a bright turquoise blue, the light pulsing in the clouds above Astoria, where my son and his girlfriend live, yet visible as far away as Brooklyn, Harlem and the Bronx.

My son was asleep on the couch. His girlfriend S. was sitting at the kitchen counter watching something on YouTube when she noticed an eerie blue glow at the window, followed by a rumble like thunder that lasted for minutes, and the house lights flickering off before coming back on. When she looked out the window she saw all her neighbors  at their windows peering out too, and people were gathered in the street, pointing.

"It looked exactly like an alien invasion," she told me this morning. "I was completely freaked out."

She woke my son to show him the sky, and he said, "Oh, it's probably an explosion on the electrical grid. There's a Con Ed station over that way. I bet something blew."

"But why is the whole sky that weird color," she asked him. "And why does it look like the explosion is happening in the clouds."

"Electric fires burn on a blue spectrum, and the color's reflecting off water droplets in the clouds," he said. He was so calm that S. relaxed, too, even though the whole scene had looked to her like something right out of the movie Independence Day.

As it happens, our son's theory was right. Indeed, the news soon reported an explosion at the Astoria Con Ed station. It looked like this.

We have a saying in our family: #RadFacts. My son's name, plus whatever arcane fact or explanation he comes up with, which is always, always correct. That's because my son has the kind of brain that catches and holds everything that enters his consciousness. He's like his dad, and namesake, that way, so really the hashtag works for them both.

As you can imagine, the tweets all night were crazy, with people posting photos and videos from all over the city, and everyone reflecting on the possibility that the Con Ed fire was a cover story for actual extraterrestrial contact. My favorite tweet of all was this one from MSNBC's Katy Tur:

"Folks on Twitter reacting without surprise to the prospect of an alien invasion in NYC is peak 2018."

It sure has been that kind of year.