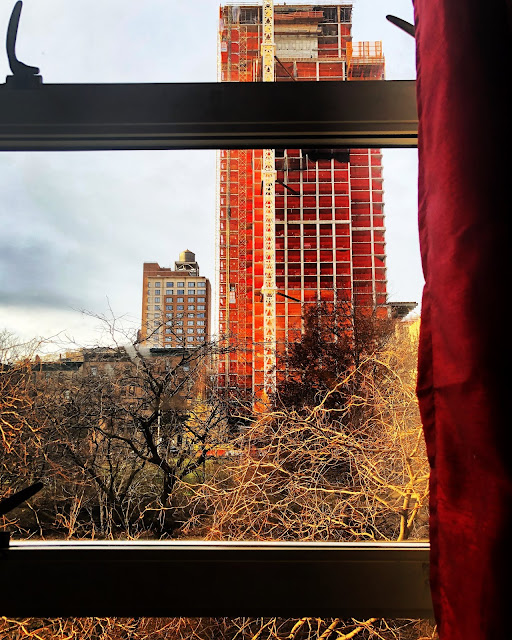 That was my view last week as I sat at my dining table every morning, editing the completed draft of my manuscript. I have now sent it off to my subject who is reading it and will then give me her changes. She says so far they are minor, which is a relief. And then on to the editor, and once she accepts what I've delivered, I can exhale. I have another project starting in the new year, a proposal followed by the book, assuming the proposal sells. And yesterday I learned that the magazine editing gig I picked up last summer has been extended to next summer. We have no formal arrangement. They hired me to edit one issue, asked if I could edit the next as well, and after that just continued sending me stories and paying me for the work.

I held my breath hoping it would continue because it is a wonderful thing to have a regular paycheck, but knowing how short staffed and in transition magazines are right now, I didn't want to rock the boat by pushing for a contract. Instead I concentrated on making their lives easier through the work I do for them, and now they've extended the assignment. I hope all continues to go well, and that the assignment will be extended again next June. Editing magazine length pieces is the perfect complement to long form writing—a short burst sprint using completely different muscles from the marathon of crafting a book length work. Neither undermines the other. It's my dream set-up really.

In other job front news, my son is now officially a New York City firefighter. He starts at the fire academy next week. He called two nights ago to announce that he had just completed his final shift as a paramedic. He has marched toward his ultimate calling like a solider, never taking his eye off the goal. And now he has fulfilled the dream he's held ever since he was nine years old, to be one of New York's Bravest. The journey isn't nearly over; there are still many challenges ahead, both physical and social, but I believe he will prevail through trials yet to come. He's anxious today, anticipating it all. This is how he's always been, anxious before the start, then a strong swimmer once he's actually in the water. Please pray for my boy. He's such a good and worthy soul.