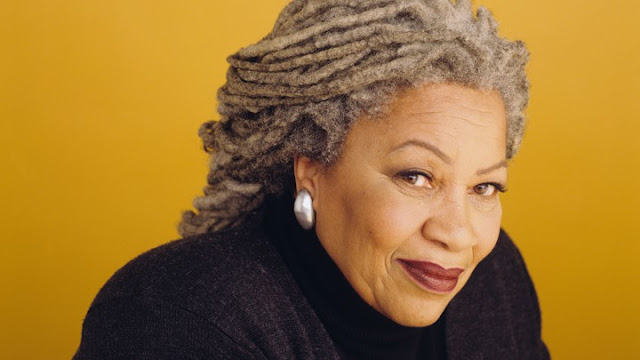 Toni Morrison has died. She was 88 years old. I worked with her when she was an editor at Random House in the summer between my junior and senior years of college. She used to come into the office from her home upstate, usually wearing gardening clothes and a big floppy straw hat. She had a deep rumbling laugh that she deployed often, and I remember she sat me down one day and asked what I wanted to do with my life. If you want to write, she told me, make sure you love it, because it won't be worth the pain otherwise. A year later, she was the commencement speaker at my graduation from Barnard, an all women's college. In her address to my class, she charged us never to leave each other writhing on "the killing floor of professional women's worlds." That image stayed with me, a cautionary tale. And she added: "The function of freedom is to free somebody else."

When I was a new mother, she would guide me again. She had been invited to lunch with the editors at the magazine where I worked, and someone asked her if she'd been criticized for paving the way for her son to get published. "If you are in a position to help your child, why on earth wouldn't you do it?" she asked, amazed that it should even be a question. And then she said the thing I will never forget: “You are your child’s source of security in the world,” she told us. “When your children come into a room you are in, your eyes light up in a way that confirms for them the value of their very being.”

The 1993 Nobel Laureate transformed our literary landscape, in part by giving us works rooted in the Black gaze, allowing us to see ourselves in all the ways we show up in this world, and to love ourselves just as we were. This morning, I was asked to write a tribute to mark her passing. Perhaps I will link it when it is posted. In the meantime, here is a quote from the great woman that is so appropriate to the events of the week in which she closed her eyes for good.