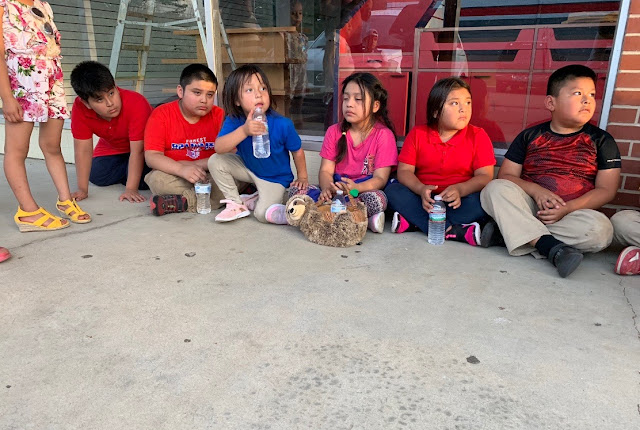 Right after posting the photo of those four beautiful little girls in my last post, I ran across another image of little brown children, this one in the news, and it just stopped me. The trauma on those children's faces. They are the children in Mississippi whose undocumented parents, more than 600 of them, were rounded up by ICE at their jobs at poultry farms and other food factories this week. The seizing of these working men and women, who pay taxes on every item they purchase in this country, happened as the piece of shit president was in El Paso, supposedly to offer condolences after the mass murder that happened there a week ago. But of course, the president is incapable of empathy, so instead, he insisted a baby whose parents died while shielding him from the volley of AK-47 bullets, be brought to the hospital so the president and his wife could hold him up to the cameras and grin obscenely for a photo op. It was sickening.

Meanwhile in Mississippi, children had gone to school that day, and at the end of the day they waited for parents to come and get them, in vain. Some of the children slept in school gyms that night, others were taken in by neighbors. Their terror and grief and tears played across news channels, displaying once again the cruelty of the current administration. Many people asked, what of the business owners who hired these so-called illegals? Why were they getting off scot free? Why do their workers pay the price? The answer is obvious to anyone paying attention of course. Even so, what is happening right now is beyond comprehension to me.

And yet I go on with my life daily. Honestly, we had a wonderful time yesterday afternoon into evening, going with my niece for her final wedding dress fitting, learning how to help her tie the bustle for her train, and then my daughter, my two nieces, my cousin and me going out to dinner during Happy Hour in Chelsea, enjoying deceptively smooth margaritas and laughing together, almost as if the stories coming across the transom aren't happening to us. But make no mistake: We may not be huddled in school gyms and sobbing our hearts out in cafeterias, and feeling annihilated from the terror that we'll never see our parents again, yet the fact is, even when we are behaving as if we are oblivious, as if we can do nothing in this moment to change things, this national nightmare wounds us all.