The season, the season 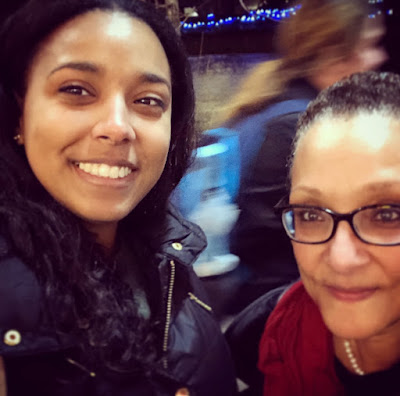 My girl and I went Christmas shopping last night, mostly to figure out gifts for the five people in her department at work. Then we went to dinner and figured out the menu for our time in Jamaica. We travel in nine days. Last time we stayed at the villas where we'll be, I sat down with the housekeeper on the first day and came up with a menu with her, but this time my niece, whose wedding it is, wants all our menus beforehand, and she's the boss. Planning a wedding, especially from overseas, is a lot.

It's been busy over here. Choir concerts, a cello concert, a tree trimming party, putting up our own tree, and trying to figure out Christmas gifts. I've spent way too much, but that train has left the station. When boxes arrive at your home and you don't immediately know what's in them, that's a sure sign you are over-consuming. Guilty as charged. I didn't meet with the personal shopper on Monday after all. I decided to wear something already in my closet to the wedding. At some point, you've got to stop spending.

What would it be like, I wonder, to be a svelte, graceful human, athletic and strong, walking serenely through the world, at ease in the body you inhabit, showing up everywhere without angst? Speaking of angst, the book is going much too slowly. I'm having a hard time concentrating. Also, if you can't find the exact right adjective, use no adjective at all. I think I'll spend the morning wrapping gifts, get that out the way. I'm feeling so scattered.

Here's a New York story my daughter told me. She was on the subway after work, it was already jam packed with commuters when the doors opened at Times Square. A woman stood on the platform outside and shouted, "Everybody make way. I just got divorced and I can't spend another moment in that man's company!" A woman's hand reached out of the crowd inside the train, grabbed the other woman's hand and pulled her in just as the train doors slid closed. The two women, one black one white, stood crunched against the door, almost nose to nose, talking in audible tones about their divorces and cheering each other on. Everyone in the train car hung on their every word. It was quintessential New York, my daughter said, and oddly uplifting.
Posted by 37paddington at 10:35 AM