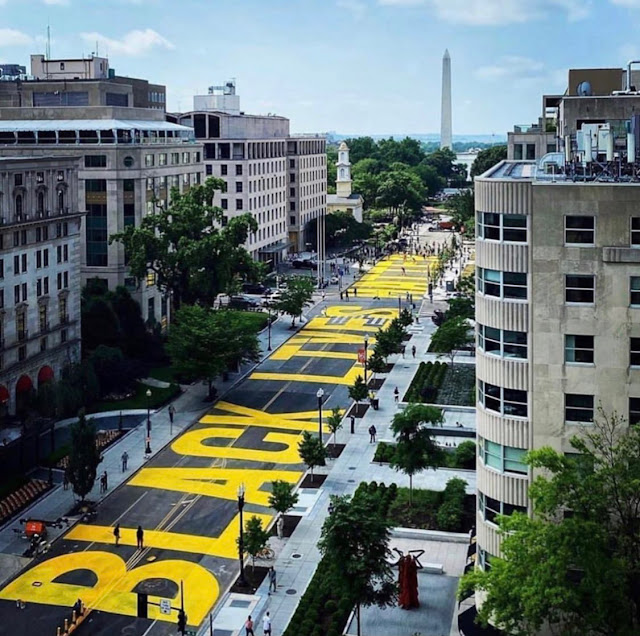 I assume by now you've seen Washington, D.C. Mayor Muriel Bowser's response to facist-in-chief clearing peaceful protestors from the street in front of The White House with tear gas, rubber bullets and batons on Monday so he could walk to that church in the middle of the photo above and pose with a Bible held upside down. Mayor Bowser authorized that huge mural to be painted on 16th Street where it happened, and now the words "Black Lives Matter" lead straight to the front door of The White House, and are visible from space. Mayor Bowser also renamed the street where Trump deployed police against American citizens exercising their right to assemble, as "Black Lives Matter Plaza." The new street signs went up yesterday. This is the newest monument in our nation's capital. Mayor Bowser is owning Trump in a rather beautiful way, and I'm here for it all day long. 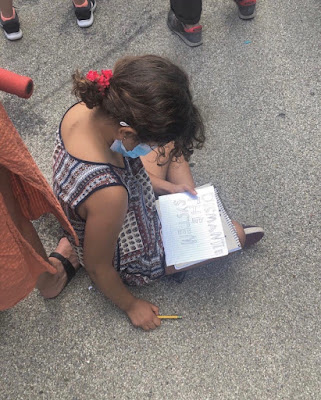 My daughter and her love are out in the streets of New York City today, with masks and sunglasses and water bottles, risking cops and covid to join "the march for stolen lives and looted dreams." That's the name of the action. I find it poetic. I am so in love with all the young people protesting in cities across the country. I am in awe of their courage and humanity, their stubborn belief in the possibility of a better world, their awakening to their own power to create such a world, which we are all witnessing them express in real time. Black folks have been very moved by the number of white allies who have joined the fight against police brutality and structural racism. As Obama said the other day, this time it feels different.

All the same, I sat on the side of my bed this morning and prayed for the safety of all the marchers out there today. I do this every morning. I figure the force of my thoughts, my heartfelt wishes, just might help to counteract the force of police batons, and move the malleable universe in the direction of good.

I do know there are cops who actually intend to protect and serve. We have seen them in some cities, marching and talking with and guarding the protestors. But a whole swath of other cops are proving on video reel after video real the point black people have been making for generations—that the default of the police force is violence, especially against black and brown and LGBTQ people and anyone who dares to speak up for their rights.

It's not so surprising when you consider that modern police forces were constituted from southern slave patrols and northern night watches, whose mission was to control and dominate black people and other subjugated classes. It's why regular white folks have had the luxury of seeing cops as benign and friendly. Police forces aren't indoctrinated to see them as "the enemy."

I have been reading dispatches from a white cop who quit the force the week George Floyd was murdered before our eyes. He said he couldn't take any more, but knew that if he tried to speak out against what he'd witnessed throughout his career, his life and his family's lives would be endangered. In his anonymous posts on social media, he lays bare how the force is trained to go after black people, to harass them and escalate the situation until they can be said to be resisting arrest, when all the person was doing when approached by the cops was invoking the right to breathe in public spaces while black. 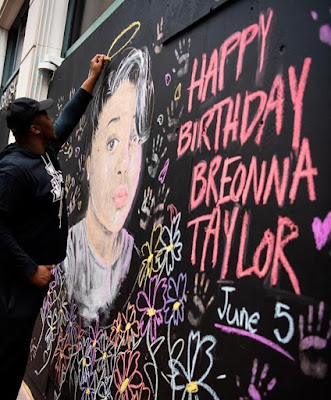 We get targeted and killed inside our homes, too. Too many examples come to mind with absolutely no effort of thought. Yesterday was Breonna Taylor's 27th birthday. She's the Louisville EMT who was asleep after a long shift dealing with covid patients, when cops burst through her door unannounced on March 13 and started firing. The hit her 8 times, killing her. They arrested her long time love, who had fired his weapon when he heard their front door being bashed in. He has since been released without charges. Remember, the cops at no point identified themselves before they started shooting. They were looking for a man who did not even live in that building. A man who it turned out was already in police custody when they pumped bullets into an award-winning member of the city's Emergency Medical Services as she slept in her bed. And now the world is left the mark Breonna Taylor's birthday without her, to seek justice on her behalf. The cops who killed her have not been charged. 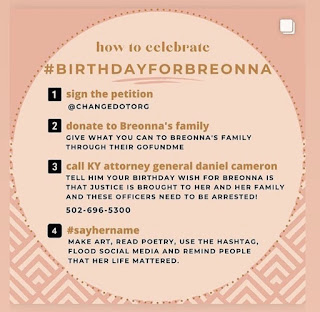 People are now starting to consider what alternatives to a violent police force might look like. The hashtag #DefundThePolice is trending. My friend Scott, a former homicide cop, wrote the other day that we need to "quit asking police to solve our social problems. Police tools are force and violence. They cannot treat the underlying problem and it's unfair of us to ask them to." I hear that loud and clear. So while I may be among the brainwashed masses who can't yet imagine how society would function without this violent force that is clearly not protecting and serving many of us, I'm ready to think about how we can take funds currently used to provide military grade arsenals to local police and instead use that money to create solutions that center people who have been humanely trained to protect citizens, meet their social needs, and preserve the peace.

Once again, this is not where I thought I would go when I sat down to write this morning. I thought I would talk about my family, and post pictures of the progress my man is making on the model sailing ship he's building, and of my son in his FDNY blues, laughing with my daughter, who ran over to see him when stopped by a firehouse in her neighborhood. "We didn't do well on the social distance, but!" my girl texted when she sent her dad and me the picture. She was so happy to see her brother, who she hasn't hugged since everything went to hell back in March.

She went to see him to ask if she could write his name and number on her arm when she attends the protest today. In case anything hairy happens. I had told her she could write my name and number, but she decided his was better, as he's been out working as a first responder throughout the covid lock down, and she'd rather me not be exposed to the crowds. She doesn't realize that if anything were to befall her, nothing could keep me from going to her. But her brother agreed she should use his number. Our boy confessed he's getting weary of not seeing us, too. He has three weeks off at the end of the month. He said he is thinking he'll quarantine for two of them and then come see us. He continues to be healthy, thank God. Here's one of the pictures I had intended to post. I've rambled long enough. The ship's progress will have to wait for another time. 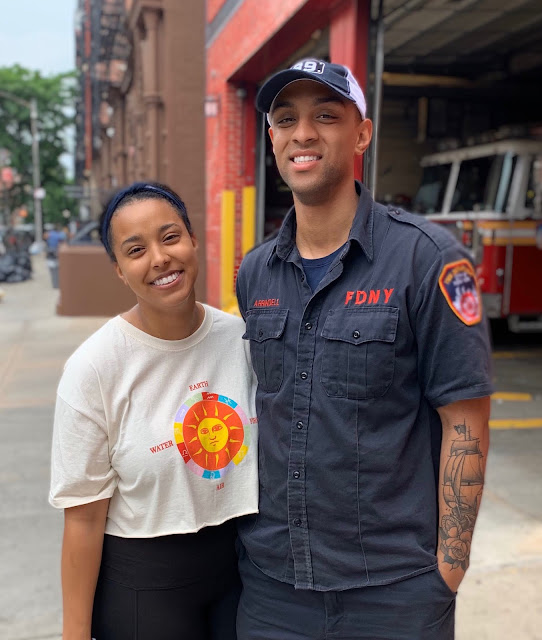 Never wonder why I pray.