My nephew, who joined the National Guard after graduating from college last summer, has just been activated. He is to be in Richmond, Virginia by 1 p.m today. For those of you who have been reading here a while, this is my late Aunt Winnie's grandson. Now he will be out in these streets with a rifle in his hands. He's 23. I don't like it one bit.

When Obama addressed the nation last evening, it was as if we had a president again, as well as a wise professor who could teach us, and a dad who could calm us and give us hope. One day later, reading what happened in cities across the country overnight, I am again plunged into despair.

In Austin, Texas, a 20-year-old college student, Justin Howell, was shot in the head at close range by so called non lethal bullets. As he lay convulsing and bleeding out on the street, a medic ran to help him, his hands raised and crossed at the wrists to identify himself as EMS. The police shot him too, as well as other people trying to get Justin to safety.

This hits home hard for me because my son is a medic and a firefighter in New York City where, as in so many other cities across the country, police in riot gear seem to be losing their natural minds. Please read the young medic's account of what happened in Austin. 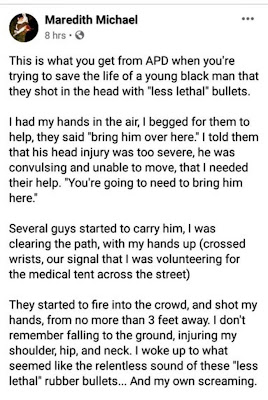 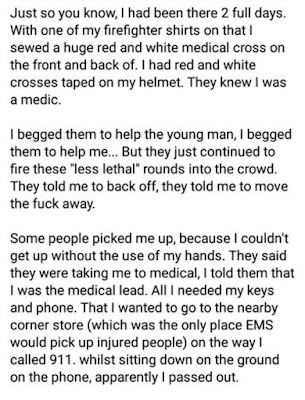 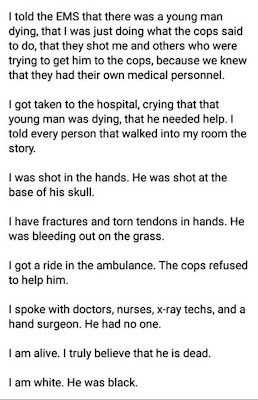 Justin Howell, a political science major at Texas State, remains in critical condition with a fractured skull and brain damage. All he was doing was exercising his First Amendment right of protest. I don't want to be gratuitously triggering in this space, but if you want to see what so called "non-lethal" ammunition is doing to people, go ahead and research some of the photos from this past week alone.