How can I resist?

I must have watched this clip a hundred times. In the absence of grandchildren, my daughter sends me pictures and videos of her dog Munch, doing cute things.

Munch and his lovelies will be coming to us for Thanksgiving, as will our son, though he will arrive later, as he's on shift at the firehouse that day. His fiancee will be with her family in New Jersey, so it will be just us five for dinner, and Munch of course. We'll be well under the no-more-than-ten-people guidelines for indoor gatherings. I'm really looking forward to a week of thrice daily walks around the neighborhood with my girl and her pup, though I confess I'm a tad nervous about any gathering at all, now that covid is once again on the march in New York City and everywhere. My daughter and her love seem to be inside a fairly safe bubble up there in Cambridge. He gets tested twice each week, and she's going to get tested before she comes to us, and she even sent me the Harvard dashboard that shows the covid situation on campus, how many tests, how many positives, how many in quarantine, etc. They have a lower rate of infection than the city of Boston itself. The dashboard shows a 0.02 percent rate of infection from the many hundreds of tests they do daily, and they're quick to isolate and contract trace for anyone who comes up positive. My girl said that since the school year began, there was one positive result in their section of about seventy people, students and their partners, and the student was immediately quarantined. Subsequent tests came back negative, however, so the previous positive test was concluded to be a false result.

I do think people who are fairly fit, like my children and their loves, may be less likely to contract covid to begin with, and if they do, they are likely to have a better time of it. My husband and I cannot claim such prime physical conditioning, however. With our various underlying conditions, we are definitely at great risk. Still, we're going to do Thanksgiving with our kids. I miss my girl something fierce, and so I'm just going to pray for our continued safety and hold my babies tight.

My niece in Texas has been texting our group chat with photos of Thanksgivings past. She can't believe we won't be together this year. For almost two decades, she's missed only one year, when there was a family reunion in Florida that I didn't go to because my mom was too frail to fly there from Jamaica, and the idea of being at the reunion without her made me sad. We had a rollicking Thanksgiving in New York with other friends and family that year anyway, but face timed our missing reunion folk continuously. I guess we'll be doing some face timing again this year. Here's one of the pictures my niece sent. That's her on the left, with my daughter in the middle and another of their cousins, the cello-playing niece who lives with us, on the right. 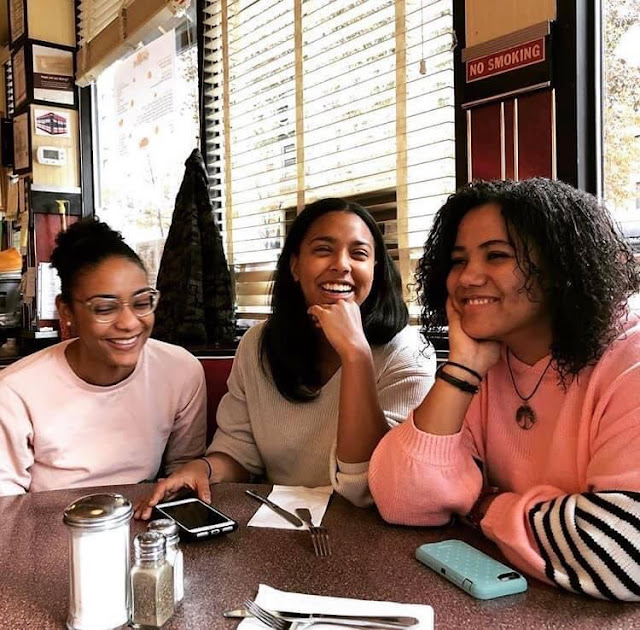 My niece who lives with us won't be here for Thanksgiving either. She went home to Orlando in September to see her family—and vote—and has been working remotely from there since. She's returning to New York in December. I often think how she always dreamed about moving to New York City, and when she finally did, not even a year later everything got shut down, and she was stuck inside for months with her old aunt and uncle, seeing none of her friends, and unable to really enjoy the city with her boyfriend. I'd half expected her to decide she was staying indefinitely Florida, but a week ago she texted her return date and shared that she's missing New York. Maybe she's one of those people the city calls, and never lets go. Until recently, I thought I was one of those people myself.