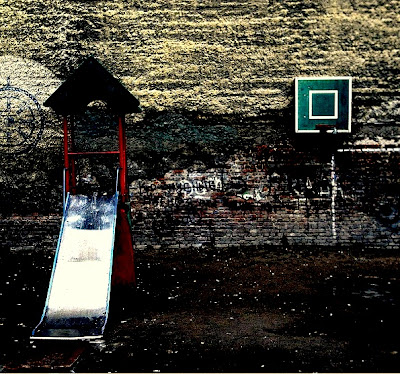 When I was four, my father, a jurist in Jamaica, was granted "long leave" for a year, a sabbatical with passage paid for him and his family to England. This was a clause in the employment contracts of some civil servants in what had until recently been a British colony, and my parents had decided just what to do with the year. My dad had studied law in England. He and my mother had moved there right after they were married, and spent their first years together in a small flat in London. My mom worked as a secretary while my dad went to law school, and that period of their lives remained a sweet memory for them.

My brother was conceived in England, and his godparents became the older white English couple who lived upstairs and were my parents' landlords. This couple, the Dixons, were surrogate father and mother to my parents during their years as a young married couple in London. A decade later, when my father qualified for long leave, the plan was to return to their old flat on the ground floor of the Dixon's home at 22 Studdridge Street. They would enroll their children in school and while the Dixons watched over us, my parents would travel the continent, visiting countries they hadn't be able to afford in their student days, and also spending some time with a dear friend of theirs in Ireland.

As I recall it, my parents came and went and were never away for more than a couple of weeks at a time. And I had my older brother with me, who was six years old to my four. But the loneliness I felt when they were gone was abject. The Dixons, so dear to my parents, were strangers to me, so formal and mannered and foreign in their ways. I became a shy, locked in girl, unable to find her voice, dreaming in the cold front parlor and peering out the corner of the heavy brocade curtains at people passing on the street.

Imagine taking a four year old used to running in the yard after school and climbing trees and using a capsized wheelbarrow as an armchair as I chatted at the fence with the Azan children next door. Then take that child and deposit her for endless months in a dark, narrow English townhouse filled with uncomfortable Queen Anne couches and claw foot antiques. And on the walls, portraits of somber-faced men and women who looked nothing like my sprawling, exuberant Jamaican family. I remember the bathroom was freezing cold and everything tiled and white and fluorescent bright, and I hated to go in there. To make matters worse, I have barely a memory of anything before that time. There were vague images of laughing aunts and uncles and hide and seek at birthday parties with cousins against which I compared the circumstances in which I now found myself. But those images were blurred and dreamlike, while that year in London remains sharp in all its details, the moment the clock started for me in terms of knowing myself.

And then there was school. Peterborough Primary School, the back gate for which was just up the street from the house where we lived. From upstairs, we could look over the brick wall that marked the end of the back garden and see the expanse of asphalt and the huge, imposing, crumbling stone castle of a building that was the school. And just beyond the wall, right on the other side of it, were the outdoor bathrooms the kids used during recess. I am sure there must have been bathrooms in the school building as well, but I never found them. It never occurred to my four and then five year old self to ask. If I needed to go, I used the ones at the far end of the playground, the ones I could see over the wall from the house where I stayed.

The stalls were on one side of a long stone corridor open to the sky. There were about ten covered stalls with wooden doors that had once been painted blueish green but now were faded and splintered and decrepit, and there were no locks on any of them. Whenever you were inside one of the stalls, you could count on mischievous schoolchildren running down the row and banging open all the doors and laughing maniacally at the fact that they had seen you with your pants down. I never got used to it. I used to slightly wet myself so as not to have to go.

This was the period of my life when I began to feel that something was wrong with me. Everything about me was wrong. I began to notice that I was a fat dark child among fleet blond pink-cheeked children racing around the school yard. I felt ungainly when I ran, which was seldom, because no one asked me to join their games and I didn't know how to find my own way in. In class, there was only one other child of color, a dark-skinned Pakistani boy who did befriend me. The way he did it was in art class one day. The other children at the table had agreed that he and I should be given only the black crayon to color with. This boy kept sneaking other colored crayons from the pile and holding them in his lap. I was sitting across from him, and I realized what he was doing when he started passing me the other colors under the table, until we had most of the crayons between us, passing them back and forth and drawing and coloring to our hearts content, and none of the other children were the wiser. After that, I considered him my friend, though I can't recall ever having a single conversation with him.

I now understand that four and five year old children are at the age when they are classifying things, and this boy and I were visually different from the other children in the class. Their neglect of me may have been based on little more than that, combined with my painful shyness at the time. And yet it left its mark. Especially since my older brother was having none of these problems. He was the prince of his class, the new boy everyone seemed to be fascinated by, the one everyone fell over themselves to befriend. I remember twin girls in pigtails and plaid pinafores who seemed always to be on either side of him, except when he was whizzing past me on the playground, at the center of all the games. Well, my brother was dark complexioned and foreign like me, so that clearly wasn't the cause of my aloneness. Maybe it was because I was fat, I thought. I found all kinds of other reasons, too.

The absolute worst day of that whole year was the morning our teacher handed out a short paragraph and asked us to underline all the verbs. Perhaps it was the English accent in my Jamaican ear, but I thought she told us to underline all the words. The exercise made no sense to me but, obedient child, I did as I thought I had been asked. When she collected my paper, she stood over me and exclaimed, "You stupid girl!" and I don't recall what else she said, just that for the rest of the class I was made to stand on a chair at the front of the room with my face in the corner for my transgression. I think it is no mistake that I grew up to be a writer and an editor. Because as lonely and lost and locked in as I felt that year, in some untouchable part of me, I knew I knew that teacher was just plain wrong.