The Cool, Hip Aunt From America 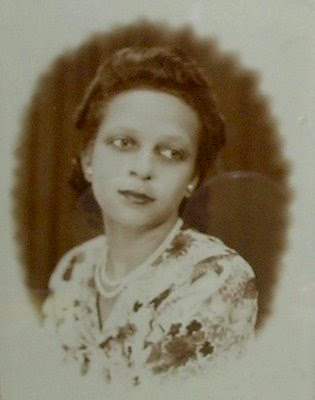 That's my aunt, pictured above, in a portrait made around the time she got married in 1949. She will be 91 this September. I'm sitting here remembering her as she was, the funny, opinionated, energetic woman who used to visit us from New York in the summers, with her curly gray afro and piercing green eyes. We loved her madly. She was the cool, hip aunt from America who understood us better than our parents.

And she was a feisty. Once, when my son was three and came home from preschool with a scratch on his face, she bent all the way down and put her nose to his and said, "Did you hit him back hard?" My son, parroting his parents' instructions, told her, "I don't hit!" She straightened up, looked at him with a frown and said, "So how do you plan to defend yourself?" Her sisters say she was always like that. Figuratively, a brawler.

She was the oldest girl of nine children, a gifted pianist who left Jamaica because she got tired of having to give all her little brothers and sisters piano lessons. "They never practiced," she complained to me once. "My mother cared for them to learn music, but they didn't."

She was the fourth in our family to migrate to America. The hoards came after her. She eventually sponsored all eight of her brothers and sisters, and the multitudes of their children. We have a joke in our family: If the U.S. government had known how many of us would follow my aunt to America, they would never had let her immigrate back in 1947.

She was officially the first Black employee of Barnard College (she says she was the second, that there was one woman there before her, but she was passing for White). My aunt rose through the ranks and eventually ran the college's Department of Office Services. She was the only director who did not have a college degree.

On her annual visits to Jamaica, she lectured her nieces on the importance of getting good grades in high school, and one by one, as we came of age, she had us apply to Barnard. She stressed that our grades would have to get us in, but if we made the cut, she would help to get us decent financial aid. Eventually six of her nieces migrated to New York and enrolled.

She employed us all. After classes, we xeroxed hundreds upon hundreds of pages of professors' lesson plans, sorted mail, made deliveries of printing plates downtown, and ran the addressograph machine. My years at the college overlapped with three other cousins', and my aunt made sure our work hours seldom coincided, because she didn't want us chatting and socializing on the job.

One cousin and I did manage to work together in my aunt's office one summer. We'd hang out till late at night with our friends on campus, then head off to work each morning. We were living with my aunt. One morning, we didn't wake up on time. My Uncle Charlie, watching my aunt gather her things for work, said, "Aren't you going to wake the girls?" My aunt responded, "Let them sleep. While they're asleep, they still have a job. When they wake up, they'll find out they have no more job." We laugh about that now. But she didn't fire us. She just lectured us and made us work that day for no pay as punishment. Work was serious business.

Ironically, my aunt is the reason we are all here in America and able to take care of her. Two of the six nieces she helped get to Barnard now act as her power of attorney and health care proxy. And when it became clear that her daughter's troubles were putting her 6-year-old grandson in jeopardy, a third niece took him to live with her family in Virginia. The truth is we would all do anything for my aunt, because when she could, she did everything in her power for us. She was so vigorous. Every one of us is who we are today because of who she is and what she taught us and how she has lived her life. She is our beloved matriarch.