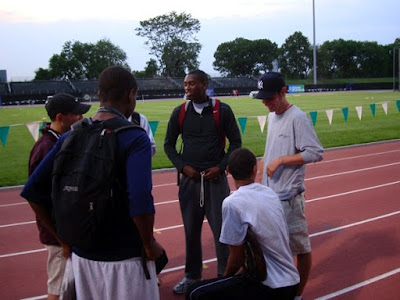 My son decided he wasn't going to miss City Championships. He wasn't going to be absent for the last big track meet of his high school career. I watched him will himself better these last couple of days, and don't you know, he is there now, at Ichan Stadium, competing with his teammates one last time.

He just ran the 110m high hurdles. He was running carefully, making sure not to collide with anything, not hurling his body through space as he usually does, but his dad says he looked steady. Now he's doing high jump.

The nurse from his doctor's office has a son who also runs high school track. When she saw my son at the meet, looking thinner, but hale all the same, her mouth fell open in a perfect O. Can you say miraculous recovery? Still, I feel a secret sense of comfort that she's there.

I know he's not all the way back, though. Last night, at 10:30 pm, he got up from the couch and announced, "Well, I have a meet tomorrow morning. I'm going to bed." That was the first time in his 17 plus years on the planet that he has ever gone to bed voluntarily! Ever since he was a baby, he just passes out, loses consciousness wherever he is when his body runs out of gas for that day, usually on the couch in front of the TV. The only time he ever falls asleep in his bed is when we chase him there, which we don't do anymore because, well, he's almost grown and about to leave home. So last night, when he climbed into his bed and was asleep in minutes, I knew his body still had more recovering to do.

His dad drove him to the meet this morning and stayed with him so he wouldn't have to battle public transportation. This is my husband's last meet too, which makes it bittersweet. He has attended almost every one and most of the soccer games, too, over these last four years. My son says often, "My friends think my dad is mad cool." I totally agree with them.

Update: My son made it into the semifinals, contributed some points to his team, and they won the championship! What a great finish for the senior class. There were some disappointments: A couple of all-stars got edged out of first in their races. And one of my son's closest friends, Jordan, had to take second place in high jump for the first time in his high school career.

Jordan was crushed, especially because he won't have a chance to redeem himself. The other kid PR'ed at a height of six-foot-eight, which Jordan has jumped before but didn't at this meet. He was a good sport about it, but said ruefully, "And I'd been talking so much trash about winning, too." Actually, I think it might be a good thing that he lost. It makes him hungry again right at the moment that he enters college, reminds him of what it feels like to dig deep and compete. But I didn't say that to him when he came by our house. I'm sure he wasn't in the mood to hear that.

Lucky for him, my daughter had made mini fruit tarts for her cousins (both of them left today), and Jordan thoroughly enjoyed two. My son kept rushing him because they were late for a party. "Come on, man, just stuff that in and let's go!" And Jordan, gentleman that he is, replied, "No, this has to be savored." My daughter just beamed and said nothing.

Yes, my son went out to a party after the meet. I take that back about his body needing to recover more. His mind says he's back, so it would seem that he is. I'm glad he's rallied. But now my husband isn't feeling well. I think he'll just stay in bed tomorrow.
Posted by 37paddington at 12:50 PM