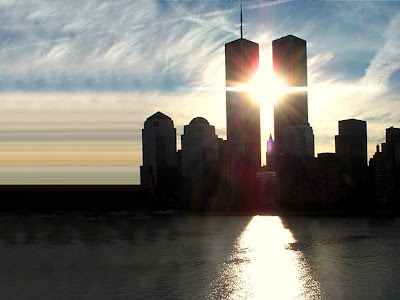 My husband avoided the news today. He didn't want to hear the pundits, left and right, use the anniversary of that terrible day, September 11, 2001, as so much propaganda for their agendas. "This is a day that stands out in my life," he said. "I was here. I lived it. I remember clearly walking across Central Park to get my daughter from school, and I remember us walking back across the park to Broadway, and looking up into the clear blue of the sky and seeing the ash. I remember the quiet that came over the city, and I remember the terror I felt, two days later when that false alarm came and we thought it was happening all over again. This is not a day to be used for politics. What happened on this day was real for me."
Here is what I remember of that day nine years ago:
I remember my friend Michelle called and told me to turn on the television, a plane had crashed into the World Trade Center. I was alone at home, my husband at work, my children at school, and I had been sitting at my computer composing a letter to Maya Angelou, trying to find the words that would convince her to write the foreword for a book I was editing.
I remember the morning was the most brilliant blue, that there was a clean, crystalline feel to the air.
I remember watching the TV screen as a second plane streaked into the frame, the loud, whining sound of the engine as it exploded in a sudden fireball against the second tower.
I remember the moments of confusion before realizing that this was not an accident, that the plane was a commercial jetliner, and please God let there have been no passengers on that plane.
I remember the reports started coming in that other planes had been hijacked, that the Pentagon had been hit, the Capitol had been hit, no, no, not the Capitol, that report was a mistake, but there were more planes, headed to the White House, headed who knew where and the rising panic in the voices coming through the TV, and the not knowing.
I remember sitting in my living room on the phone with my mother, who was watching in St. Lucia as the first tower swooped down in a graceful heap, almost like a ballet, and I peered into the screen, into the billows of smoke, unable to believe there was only sky where a moment before steel and concrete had been. "Blue sky!" I screamed into the phone as the tears rolled incoherently down my cheeks. "Mom, it's only blue sky!"
I remember talking to my husband by phone, and us agreeing to go get the kids, then 9 and 7 years old, we wanted them with us, and me running up Broadway to get our son from school. My husband meanwhile was on his way to get our daughter. I remember the relief I felt when the teacher brought my son to me, and I grasped his hand, and I knew that I would do anything that was necessary to keep him safe, just as I knew my husband would protect our daughter.
I remember stopping at the bank to take out as much money as possible, in case this was the beginning of an apocalypse. In case more of the city was going to disappear in flames and smoke.
I remember my friend Robert calling me to say that 400 firefighters had gone into the buildings, and turning at that moment to see the second tower kneel to the ground, the concrete and steel and flying paper fanning out around its slow-motion descent like swirling skirt.
I remember the pieces of paper shooting violently up into the air, where they fluttered and floated all afternoon, so many once-important files and documents taking flight like sightless doves.
I remember the people covered with blood and ash, and the empty looks in their eyes, the disbelief, the sense that the world they knew had been knocked off course, and nothing would ever be the same.
I remember my husband and daughter finally arriving home, and my girl going straight to the terrace where her toys were, and quietly setting up pretend games with her dolls. About an hour later,  she ventured into the living where the adults sat transfixed by the image of the towers falling, over and over again. I remember her climbing into my lap and whispering, "Mommy, are we going to die?"
I remember at twilight our son went downstairs to the courtyard in front of our apartment building, where he and his friends played soccer in the semi-darkness as fighter jets buzzed overhead and the parents huddled on the benches and talked about what had happened in hushed tones.
I remember my son leaving the game and walking over to me at one point, standing in front of me and saying solemnly, "A lot of heroes died today." For a long time after, until this year really, he wanted to be a firefighter. I think he wanted to understand the kind of bravery it took to run into burning buildings to save people you do not know.
I remember the silence that day and the way everyone wordlessly met each other's eyes, really seeing one another and asking to be seen in return.
I remember the people holding up photographs, crying, searching for their loved ones against a backdrop of twisted steel.
I remember the long night and waking up the next morning and thinking as I opened my eyes that it had all been a bad dream. But it wasn't a dream.

It really happened. We remember.
Posted by 37paddington at 11:01 PM