I feel as if I am communicating through a thick pane of glass or from the bottom of a clear pool or the far end of an air tunnel. I feel disconnected somehow, not quite real.

The news doesn't help. Here are the stories playing on a loop this morning:

1. A 26-year-old woman from Queens who went missing, whose sister received a chilling text message from her phone saying "The girl whose phone this is is dead," has been found alive in Texas. She boarded a bus away from her home because she said her parents were forcing her into an arranged marriage. Pretty girl. Of course. Otherwise the news would have taken no notice. I'm glad she is safe.

2. A member of Michelle Obama's security detail threatened to shoot her and then used his phone to show a picture of the gun he would use. What the hell? The man has been removed from the First Lady's security detail. I don't understand such hate. But perhaps it is not hate, but deep mental instability.

3. Folks are calling for Joe Paterno's statue at Penn State to be torn down, and for the whole multi-million dollar football program that failed to protect vulnerable little boys to be shuttered. I second that emotion. And third and fourth it too.

4. Steven Tyler is leaving the judging panel of American Idol. JLo and Randy may not be far behind. Is anybody still watching?

5. A New York Senator and others are all in a tizzy that the Ralph Lauren uniforms to be worn by U.S. Olympic athletes all bear "Made in China" labels. Discuss.

There are more grim stories that I don't have the heart to report here, but why am I letting all this in? I'm just bringing myself down. Inside me is a vague hurting place. I know what it is. It's just life really. It's nothing more than the particulars of being alive in this body, looking out at the world with these eyes, connected to the people in my orbit.

And, too, I am missing what was. My children are grown. They are in a good place. I miss the years of raising them more than I ever imagined I would. But all is well with them. Despite the usual challenges life throws up to help us strengthen the muscle for living, they are amazing and wonderful and really okay. May that ever be so.

Here's something sweet from the news cycle. The New York Philharmonic concerts in the park are back. The New York Times carried this photo by Joshua Bright of children enjoying the music in Brooklyn's Prospect Park last night. There's an idea. Maybe I'll go listen to some music under the stars. I hear the Philharmonic will be in Central Park next Monday. 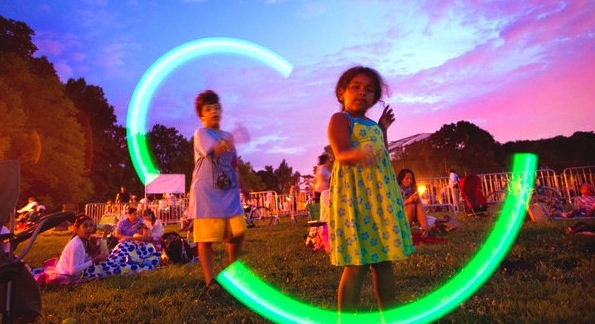