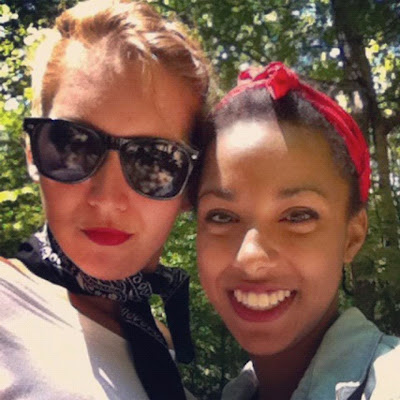 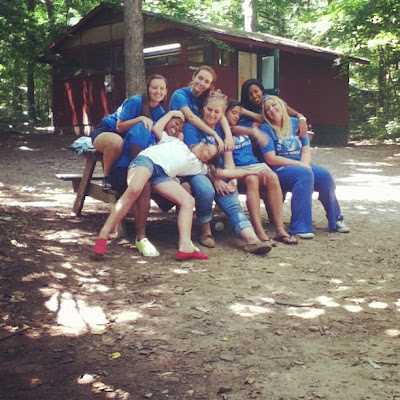 My baby comes home from camp on Saturday. That's her and her best girl in the top photo taken during the camp 'fifties luncheon. And that's some of her fellow counselors in the second photo. I scrounged these off of Facebook. We drive up to get our girl from camp this weekend and then she's home for the summer until she goes to college next month. We're all going to visit my mom in St. Lucia for a week, and the rest of the time we'll be shopping for dorm room paraphernalia and she'll be hanging out with friends. One of the things I realize about when my kids are gone is that I also miss their friends. Even the ones I don't see all the time. I miss hearing about them. My daughter, for example, would no doubt have been happily counting down to The Dark Knight Rises movie release with her friend who loves Batman, and I would have felt sufficiently connected to what was going on with him. Truth be told, after our girl went to camp, and I was watching the basketball playoff finals with just my husband, I actually sent one of her friends a text saying "It doesn't feel quite right to be watching this without you," because he had watched all the games leading up to that one with us. He sweetly responded that it didn't feel right to him either. Now she's coming home and I'll get to see the five girls she calls her sisters, (some of who I see anyway when she's not here, because the moms are also friends) and also her high school clan, or at least I'll get to hear news of them. Life does shrink a bit when our children grow up and leave home. And then we have to fill it with new things so that it can expand and be rich again. Yes, I was one of those mothers who was endlessly entertained by her kids while they were growing up. There were few things I found more fascinating that their ever evolving selves. (Oh, who am I kidding? There was nothing that involved me more.) I still find them endlessly fascinating, I just don't have a front row seat anymore. Except sometimes. One of those times is coming up in two days. As my girl would say, Wheeeeeeeee!