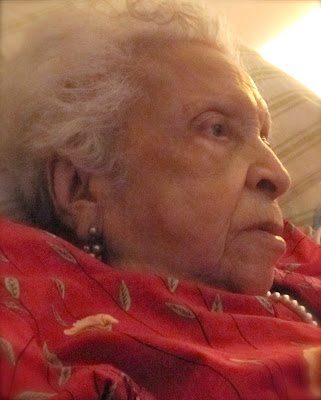 Last night, we all came out for her, those of us who live in the city and environs. In the end there were 20 of us gathered round her bed, from a newborn to nieces in their fifties and sixties to her eighty-something sister who drove over with her daughters and son and grandsons from New Jersey. The kids, all of them boys, three of them aunt Winnie's great grandsons, raced through the house, dodging legs and furniture and making the noises children make at birthday festivities. It sounded like a party. Her daughter came, too. My cousin, the professor, had stopped to collect her. She wasn't very high, though she did have an empty bottle of vodka in a paper bag that she left on the kitchen table next to the birthday cake. But she didn't show out. Aunt Winnie stayed in bed this year. A year ago, her son was still alive, and so was my Aunt Fay's husband, and four more of her sisters including my mom had managed to fly to be by her side, but this year, none of them is able to travel anymore. But there was a crowd anyway, and there was the newest generation scooting under and around the hospital bed, playing catch and hide-and-seek and there was laughter and Aunt Winnie looked at everyone around her and tried to say things that I wish we could have understood, but it was a party. We came out for her. There was no question that we would, and it was good to be there with her, all the souls she had welcomed to New York so many decades before, now with their spouses and offspring singing a rousing Happy Birthday to this woman we love, all of us together. For her. 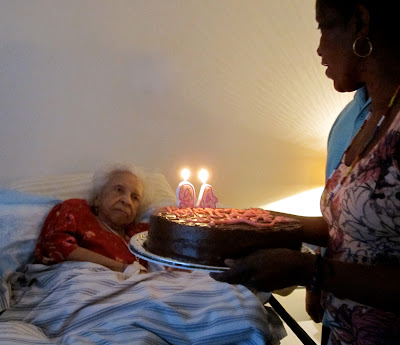