I am not entirely sure what is up with me. My throat and chest feel tight, like a rock is blocking my air, and all the external reasons I can come up with don't seem adequate to explain it. I sit here, tears spilling down my face, bereft, but of what? I wish I could do what some people know how to do so well, shut down, withdraw speech and love, envelop wounds in a cocoon of don't care. Even when they do care. Oh, I am a mess today. I don't know how to move forward. I am bleeding, but there are no knives in sight. I swear it feels as if I am bleeding out.

I need to stop watching Dexter.

My daughter goes back to college in a week. This does not help. Last night the realization came upon her. "Oh no," she moaned. "Summer is over. I'm gonna have to go back to classes!" "Transitions suck," I said, and she laughed. "Yes!" she agreed. "Big time. Too many transitions!"

Aunt Winnie, 94, has a new home attendant. We had to make a change because the weekend person couldn't manage her anymore and her frustration was making her unkind to my aunt. This new woman, I can't tell if she's really good or really strange. She treats my bedridden aunt like her little baby, cooing to her and kissing her forehead after every bite she takes or sip she swallows. My aunt has been refusing to eat lately. It takes enormous coaxing to get her to unclench her teeth. The home attendant who comes during the week is the only one who is able to reliably get food into her.

Yesterday, I called my mom in Jamaica and asked her to talk to her big sister and encourage her to eat something. I put my mom on speaker phone and she said, "Come on, Winnie, one spoon for you, one for me, and know with each bite how much I love you." Aunt Winnie opened her mouth and took a few bites after that and then no more. The home attendant, Mary, then offered her Ensure so she would get some nutrients. She was patient and didn't give up and Aunt Winnie eventually did drink it down. But not before Mary launched in a high-pitched warbling rendition of "Amazing Grace," which did not seem nearly so odd to my aunt as it did to me. In fact, Aunt Winnie began to drink when Mary began to sing, and so I joined in and there we were, singing the hymn written by a sailor tossed in a storm at sea as she sipped her nutrients. When Aunt Winnie finally finished the milky liquid, Mary gathered her up in her arms and showered kisses on her head and cooed at her some more. I felt vaguely uncomfortable but Aunt Winnie was nonplussed.

Mary definitely knows how to change her and turn her in the bed with the right motions and tricks so as not to injure her. She told me that the people she was working with before had asked her to leave because they wanted to withdraw food from their elder and whenever she came she would disobey that and feed her client. "She was hungry!" she exclaimed, showing me a picture of this woman on her phone. The woman was as tiny and old and emaciated as Aunt Winnie, and even though Mary should not have shown me a picture of another client, her affection for the woman was touching. Still, I'm not sure Mary doesn't have a couple of rivets just a little bit loose. I don't know whether to ask the agency to make her permanent on Aunt Winnie's case or not. I don't trust my own judgement. I guess I just need to observe their interaction some more.

Life can be so fucking hard sometimes, and the hard can blindside you, too, knocking you down when you aren't paying attention because it seemed, just the moment before, that everything was going along just fine and you could let down your guard, breathe. I can't catch a proper breath this morning. It feels trapped somewhere just below my throat. So much free-floating pain.

But look at this couple. Last night as I was heading out to meet a friend for dinner in the neighborhood, I saw them, sitting on a bench, heads together, talking. They had such a light coming off them. They seemed so happy. I asked if I could take their picture and he said, "Well, sure," and she said, "Life is just so good!" I told them I thought they were beautiful. They just smiled indulgently and graciously, and we introduced ourselves and talked for a few moments and then I went on my way. Their names are Lionel and Jean, which seems perfect somehow. I am holding on to the vision of them, today. 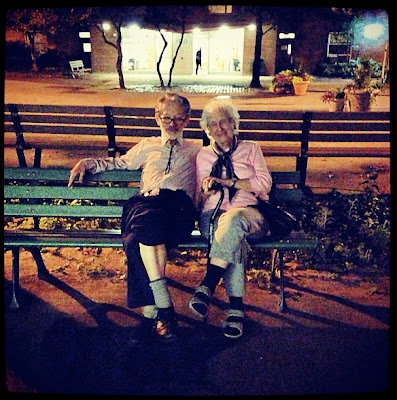